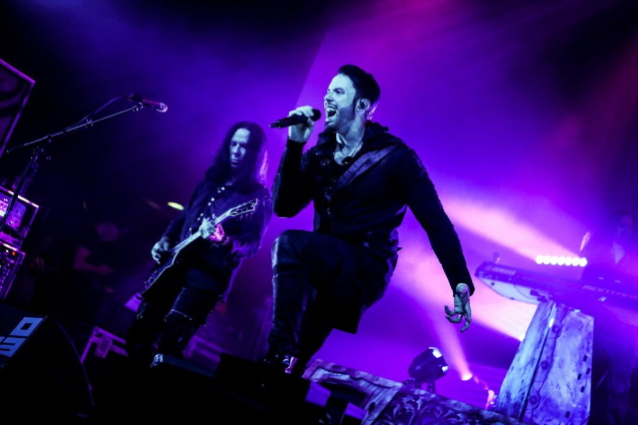 KAMELOT's long-awaited new studio album will finally be released in early 2023. Among the working songtitles set to appear on the follow-up to 2018's "The Shadow Theory" are "Bloodmoon", "Eventide", "Awakening", "Midsummer's Eve", "The Great Divide", "Opus Of The Night" and "Pantheon". The artwork for the new LP will be helmed by Giannis Nakos.

In a 2020 interview with The Metal Mixtape, KAMELOT's Thomas Youngblood spoke about the songwriting approach for the band's next album. Expressing the need to create something engagingly familiar yet altogether unique, the guitarist said: "Obviously, there's a balance between making an album that fans expect but then doing things slightly different so you're not repeating yourself. And we're pretty good at that, I think. The team that I have with me are really good at going, 'Hey, we've kind of done this. Let's do something different.'

"When it comes to music, especially metal, people expect a certain thing," he continued. "So we always try to have this sort of DNA with each record, but also kind of make them different. This new album is gonna have that same kind of approach — we have a lot of different, new kind of elements or influences, but then there's gonna be stuff that people really expect and that they're, like, 'Okay, this is KAMELOT.' So it's a little bit of a balance. You don't wanna be redundant. That's definitely not our goal. We wanna have every record be different."

In October 2020, Youngblood told the "Rockum" radio show that he and his bandmates had "pretty much narrowed it down to 12 songs" that would be recorded for KAMELOT's new album. "We're gonna be working with Sascha Paeth again on production," he said. "And we're very excited."

In August 2020, Youngblood told A&P Reacts that KAMELOT had 25 songs to pick from for the new LP. He said: "Having Tommy [Karevik, vocals] now as one of the songwriters has been killer; he's coming out with really cool stuff. And then, of course, Oliver [Palotai, keyboards] and myself, and having Alex [Landenburg] now as our drummer; he's got a lot of cool ideas. What a cool guy Alex is. So, yeah, it's gonna be exciting."

KAMELOT's latest DVD and Blu-ray, "I Am The Empire - Live From The 013", was released in August 2020 via Napalm Records. The 21-song set was recorded at 013 in Tilburg, Netherlands and includes more than 100 minutes of live music and multiple exclusive extras, including backstage interviews of all guests, bandmembers and fans. Featured guest musicians include Alissa White-Gluz (ARCH ENEMY),Elize Ryd (AMARANTHE),Charlotte Wessels (DELAIN) and Lauren Hart (ONCE HUMAN).

"The Shadow Theory" was released in April 2018 via Napalm Records. The follow-up to 2015's "Haven" was helmed by Paeth and mastered by Jacob Hansen. Guests on the album include Hart, Jennifer Haben (BEYOND THE BLACK) and Paeth. The cover artwork was created by Stefan Heilemann.

Last year, Karevik spoke to #MetalTalk about what it was like to replace KAMELOT's longtime frontman Roy Khan a decade ago. The Swedish singer has appeared on the band's last three studio albums, 2012's "Silverthorn", 2015's "Haven" and the aforementioned "The Shadow Theory".

"I never thought about it as, 'I'm gonna replace someone,' to be honest," Tommy said. "I thought about it as I wanna honor the legacy that was already there but bring something new into the fold as well. I thought of it as a huge challenge, of course. But my view on it was never, 'I'm gonna go in and replace this guy,' because I know he was loved, and he is still loved, in the metal community, and he will always be loved because of his talent and what he brought to the table with [Roy's pre-KAMELOT band] CONCEPTION and KAMELOT. I never thought that that was my job to go in and replace him. I just wanted to take on what he had going for the band and just bring me — my personality and my energy.

"In many ways, it's a different band," he continued. "It's a little bit of a different energy now. But still, people have all these albums that they can listen to from the beginning, and they have new albums, and they will continue to have new albums with great songs. That's kind of my take on it."

Karevik also talked about the KAMELOT fans' response to his addition to the band. "I have to say, it's never an easy thing, especially coming in after someone that was so renowned," he said. "Thinking back, in hindsight, it couldn't have gone any better, to be honest. I'm so happy that the fans were so accepting and really welcomed me with open arms. So I have only positive things to say about that. I thought it was gonna be more stressful, with the metal community often maybe living in the past a little bit, here and there.

"If I think about my favorite albums, for example, of my favorite bands, I also live in the past," he admitted. "Let's just be real — I glorify some of the stuff in the past. And I think, 'Ah, it's never gonna be the same again.'

"If my favorite band had to replace its singer, I don't know what I would do. So I come from the same thought. So that's why I'm so happy that everyone, or most of the people, were so welcoming."