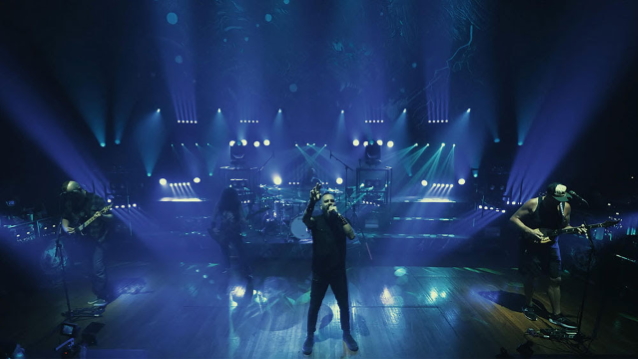 KILLSWITCH ENGAGE Releases 'Us Against The World' Video

KILLSWITCH ENGAGE has released the official video for "Us Against The World", a track from the band's latest album, "Atonement". The footage is culled from KILLSWITCH ENGAGE's August 2021 livestream event that took place at The Palladium in Worcester, Massachusetts — the site of many iconic and memorable KILLSWITCH ENGAGE shows through the years. It was directed by David Brodsky and Allison Woest for MyGoodEye.

"This is one of my favorite songs off the album so I'm glad it is getting some attention and a visual component," says singer Jesse Leach. "It's a song about facing down the odds and finding confidence to overcome and conquer a situation. I originally wrote it as a battle cry song with my warrior Highland Scottish, Norwegian, and Swedish ancestors in mind. However, it can be about friendship, love, or even the camaraderie of being in a band traveling the world. The title says it all — 'Us Against The World'!"

KILLSWITCH ENGAGE is currently on tour with SLIPKNOT, FEVER 333 and CODE ORANGE as part of the "Knotfest Roadshow". The band will also appear at several key fall festivals.

On September 10, KILLSWITCH ENGAGE performed without longtime bassist Mike D'Antonio at the Inkcarceration festival in Mansfield, Ohio after he tested positive for COVID-19. Filling in for him was the band's production manager Josh Mihlek.

In July, Leach and guitarist Adam Dutkiewicz released the second album from their TIMES OF GRACE project, "Songs Of Loss And Separation", via the band's own imprint label, Wicked Good Records, distributed by ADA Worldwide.