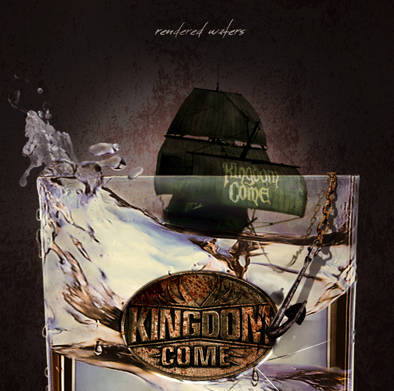 It is not the success of the early days which Lenny Wolf associates KINGDOM COME with, nor earlier hits from his long-standing career. What he really cares about is the present. Is this a contradiction in view of his new album, "Rendered Waters" (due on March 25, 2011 in Germany; March 28, 2011 in the rest of Europe; and April 5, 2011 in the U.S. via SPV/Steamhammer),which features eight old and three newly recorded songs? Certainly not. All eleven tracks were cut at Lenny's Two Square Noise Factory studio in Hamburg, Germany. In particular, the new recordings of old material show KINGDOM COME's vision of living in the here and now.

"I purposely chose tracks from the very early days to show how we play, hear and feel the songs nowadays," says Wolf. "Listening habits have changed dramatically, especially among the younger audience, which made it exciting for me to breathe new life into numbers which have not been heard for a while."

For example, "Should I" is this time played more slowly, giving it a heavier appeal. The drums are more open and the guitars, according to Lenny, feature a more tube-oriented sound and warmer, more driving tone: "Just to give it an overall 2011 vibe," he says. "Of course, you can only change songs to a certain extent if you don't want to lose the character and central theme of the original version." The same goes for "I've Been Trying", "Pushing Hard" and "Living Out Of Touch". None of them has been reinvented, but all three certainly have a noticeably new approach to them. On the other hand, Lenny changed the verse of "I've Been Trying" completely, giving it a different arrangement, just like he transported the song "Seventeen" into the year 2011.

"'Seventeen' has always been kind of a key song for KINGDOM COME, yet it has never received much attention since it has a very non-commercial approach and is either loved or hated, but with the new version it will hopefully get the recognition it deserves," he says.

Another argument against suggestions that Lenny just wanted to warm up old material is that he purposely didn't choose to re-record former hits like "Get It On", "What Love Can Be", "Do You Like It" and "Twilight Cruiser" which put KINGDOM COME on the map on a global level. He even selected a song such as "Break Down The Wall" from his pre-KINGDOM COME days back in 1985 when he played with L.A.-based band STONE FURY, which just goes to show how timeless the material is.

"It was very interesting to add new styles and to carry them into the year 2011," he says. "There are a number of songs from the Seventies. Their charm lives off the old recording technology which can't be beaten these days and therefore should remain untouched, but re-recording Eighties songs isn't such a sacrilege."

Let's not forget the three brand new songs, which feature that typical KINGDOM COME structure of strong guitar hook lines and Wolf's charismatic vocals. "Blue Trees", "Is It Fair Enough" and "Don't Remember" once again see Lenny prove his unwillingness to pander to expectations. Like it or not, he certainly follows his very own route. Although Lenny again recorded most of the instruments himself, Eric Förster, who contributed those ruthlessly driven guitar solos, and American-born Berlin resident Hanan Rubinstein, who mastered the CD, both certainly need to be mentioned for their great contribution.

To sum it up, here are a number of facts for history buffs: KINGDOM COME were formed in 1987 in Los Angeles, USA. Besides Lenny, the only German in the group, there was also James Kottak, now playing drums with the SCORPIONS. The sensational debut, "Kingdom Come", reached number 12 in the U.S. chart and went gold, and its successor, "In Your Face", made high chart positions all over the globe, too.

There is no end in sight. In Lenny's words: "KINGDOM COME is my calling. I either fall or rise with it. Apart from a few bad decisions, I've done alright. Thankful and still fully loaded, back to the future."