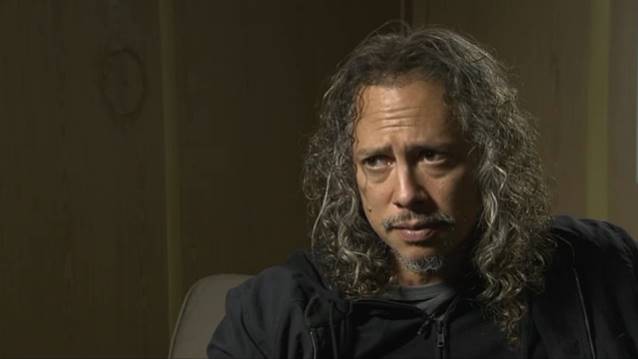 KIRK HAMMETT On Timeline For Next METALLICA Album: 2016 Or Early 2017 At The Latest

Rich "Bull" Gaenzler of the 103.3 The Edge WEDG-FM radio station recently conducted an interview with METALLICA guitarist Kirk Hammett. You can now listen to the chat using the audio player below.

Speaking about the progress of the writing and recording sessions for METALLICA's follow-up to 2008's "Death Magnetic" album, Hammett said: "Well, you know, we're moving forward. We're hoping that the album will be released next year. It's pretty much more along the same lines as 'Death Magnetic' — kind of like that direction. And, you know, we'll see. We're into it. I don't wanna say that we're a third into it, or two-thirds into it, or an eighth into it, 'cause anything could happen that'll just change that number. But, eventually, you will see a new METALLICA album, and it will most likely be in 2016, and at the very worst, at the beginning of 2017."

Hammett was also asked about how long he thinks he and his bandmates can keep performing before it's time for them to finally retire from the live stage. He responded: "We're all getting up there, but we still have drive, we still have energy, we're still inspired, we still have things that we wanna do. You know, mentally, emotionally… I mean, I think that we're not done yet. And if people like Keith Richards and Mick Jagger [of THE ROLLING STONES] can do it into their seventies, why can't we? That's my attitude. And on a personal level, I'm a musician. I wanna continue to play and perform and do what I do, which is make music. I don't wanna stop doing this. I don't wanna stop making music. I will always be a musician. I will always be a working musician, until I can't be anymore."

The four-minute video includes a short snippet of guitarist/vocalist James Hetfield in the studio at the band's headquarters in San Rafael, California, laying down guitars on what appears to be a new METALLICA song.

Hammett confirmed last week that the band was in the process of recording new material, saying, "At this point, we're still just doing basic backing tracks. James is doing his guitar stuff, and I am just kind of waiting patiently to go in there and do all of my guitar stuff."