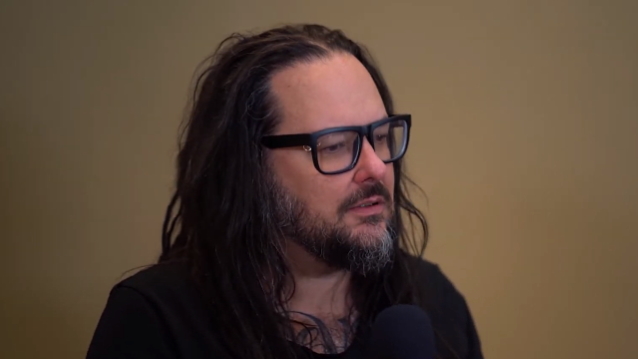 KORN's JONATHAN DAVIS On Losing His Wife And His Mother: 'It's Tragic, And It Sucks, But I'm Not Gonna Let It Take Me Out'

KORN singer Jonathan Davis has opened up about losing both his mother and his estranged wife within the same time span during the making of the band's latest LP, "The Nothing". Asked by Canada's iHeart Radio if revisiting the songs on "The Nothing" during the current tour is "helping" him deal with the grief or if it is "opening up old wounds," Davis said (see video below): "It's helping. It's like [pouring] salt on the wound, I guess — it's gonna sting, but you keep putting it on, keep putting it on, and you kind of get used to the pain and it kind of numbs you out. That's what I'm going through now. But I've had a whole year to [process everything]… I'm moving on with my life, and I've got a lot of great things going on. So I try not to dwell in the past. It's tragic, and it sucks, but I'm not gonna let it take me out. It's not gonna win."

Davis also elaborated on his previous comment that he was "starting a new life" after mourning the death of his mother and wife. Asked how things are going for him right now, he replied: "It's amazing. It is. A lot less stress. Now I've got different kinds of stress. My son Pirate's going through puberty right now, his teenage years, and I wanna pull my fucking hair out. But it's beautiful. I'm gonna watch him grow up. And [I'm] doing the thing I love most of all — being a dad. Those two things for me — being a dad and being a musician — are the same right there [in terms of importance]. So I'm happy I'm getting to do both things I really love."

Davis's wife Deven died in August 2018 at the age of 39 from the effects of mixing five drugs, including cocaine and heroin

According to Jonathan, Deven also battled alcohol and a sex and gambling addiction.

In a statement released shortly after her death, Jonathan called Deven "an amazing wife, amazing mother and amazing friend" who was suffering from "a very serious mental illness."

After marrying Jonathan in 2004, Deven and the singer had two kids together, Pirate and Zeppelin. (Jonathan's first son from his previous marriage, Nathan, turned 24 last fall.)