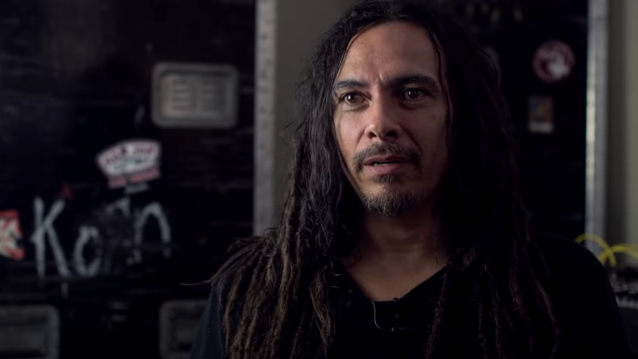 KORN's MUNKY: 'Pop Music Has Evolved Into Something So Synthetic'

For the past several years, hip-hop has surpassed rock as the most popular genre in the U.S., consistently coming out on top as the largest genre in terms of total consumption, which includes album sales and album-equivalent streaming figures.

Munky, who is promoting the new album from KORN, "Requiem", spoke about rock's declining popularity in a new interview with Australia's Wall Of Sound. He said (as transcribed by BLABBERMOUTH.NET): "Personally, I feel like it doesn't matter because if it's good and it's coming from a real place, they come a-knocking. [Laughs]

"Pop music has evolved into something so synthetic, it'll get to the point where it's so not real, if people crave real instruments and someone that's actually singing live, that whole thing will come around again because there'll be a need for it," he added. "And it comes in waves. And it's okay, 'cause we're not in it for the fame; we're in it for the fans."

"Requiem" was released on February 4 via Loma Vista Recordings. The band celebrated the LP's arrival with a special record-release event on Thursday, February 3 at the Hollywood United Methodist Church in Los Angeles, California. "Requiem Mass" saw the Southern California heavy music pioneers perform an intimate set in front of a 300 attendees.

KORN kicked off a short run of shows with SYSTEM OF A DOWN Monday night (January 31) in Phoenix, followed by dates in San Diego (February 1) and Los Angeles (February 4 and February 5). KORN's headlining tour with CHEVELLE and CODE ORANGE will launch March 4.