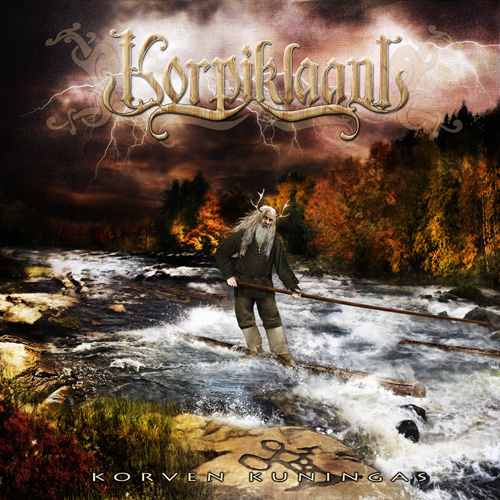 Finnish folk metallers KORPIKLAANI will release their new album, "Korven Kuningas", on March 21, 2008 via Nuclear Blast Records. Check out the cover artwork at this location. A new single, "Keep On Galloping", will precede the full-length effort on February 14, 2008 in both CD and 7" picture vinyl formats. It will also include the track "Paljon On Koskessa Kiviä". View the single cover artwork at this location.

The band has issued the following track-by-track rundown of the songs that will appear on the album:

"Finnish eastern front has always been a battlefield. People who lived there hves always dealt with the consequences of war. Iron was forged and also used in the bloody fields. However, violence always increases more violence and much of sorrow, grief and distress. In war everybody suffers. Even the ones who haven't done anything bad to anybody. It has marked the whole Finnish people to become what they are."

"Honour song to hard workers, forest and rapids men from the past times."

"Black horse with snow-white hair, will take its rider around the world. This horse isn't the ordinary moke. Its special outlook tells about some magical abilities."

"Log floating was once one of the most important things in Finnish culture. Finnish logger called 'jätkä' was seen in old Finnish movies as a same kind of hero as cowboy is seen in westerns. This is a tale of logger fighting with very hard rapid to cross by."

"In Finno-Ugric beliefs is known the idea of underwater world of the dead people. There life goes on mostly the same way as in the land of the living. But once your dead, the isn't possible to restore. The human hate has vanished and the passion has gone as well."

"The song about worry of the nature and mother earth."

"Means like Tokyo night. Hot, nice, high tempo and is over before you can realize."

"Khanty people, who speaks the Finno-Ugric language, beliefs that bear - the son of primeval god - was given birth to the whole human race. That's why bear is honoured and kept as a holy animal. Khanty people has preserved their bear rites even into our days in the deep forests behind the Ural mountains, in Western Siberia."

"In Finnish mythology Kiputyttö (Pain Maiden) creates the pain by grinding the pain of mill in the painstone. Painstone lies on pain hill or pain mountain. Sometimes there's a pain rapid nearby too. In some spells Kiputyttö also cries."

"Animal stories are the most fine and beautiful folklore. This story comes from the northern hills, from the border of tundra and taiga."

"He who reaches the fir, falls to the juniper. This story has influences from the folk story of Nenets people, who speak the language related to Finnish. The best shaman in the world gets tired of earthly sufferings and leashes his sledge towards the skies. However, the sledge brokes down and shaman never reaches the Upper world."

"Human has always been interested from where are the different things come from. It has been suggested explanations, which have given a birth to stories. Stories have changed to folklore and folklore has restored much the wisdom, which deals about life and way to see the world. It comes straight from the rapid of birth from our hearts, when the story is told forward. Thus have been born the myths and legends - and Finnish runo-singing."

15. Korven Kuningas (King of the woods)

"The Finnish word 'jänis' (rabbit) is from unknown source. It may be the track from the language spoken in Finland before Finno-Ugric speaking peoples arrived here. The original Finno-Ugric root-word is reconstructed in the form 'njomala.' North-Sámi word 'njoammil' and Hungarian word 'nyúl,' both meaning the rabbit, are of this origin for example. If the root-word would have preserved in Finnish as well, it would be 'nomala.' In this song the hunter hunts the rabbit-god himself and it may be a too big risk to take."

KORPIKLAANI entered the Finnish and German album charts at positions No. 36 and No. 52, respectively, with their latest effort, "Tervaskanto" (Napalm Records).

"Tervaskanto" was recorded at Fantom Studios in Tampere, Finland with producer Samu Oittinen. 11 songs were laid down for the follow-up to "Tales along this Road".

KORPIKLAANI's video for the song "Tervaskanto" can be viewed below.

Formed by Jonne Järvelä (vocals, guitar),KORPIKLAANI ("Woodland Clan" in Finnish) released two albums under its previous moniker, SHAMAN. In contrast to SHAMAN, which recorded songs in the original Sami language, KORPIKLAANI's material is writen mostly in English, but also in Finnish.