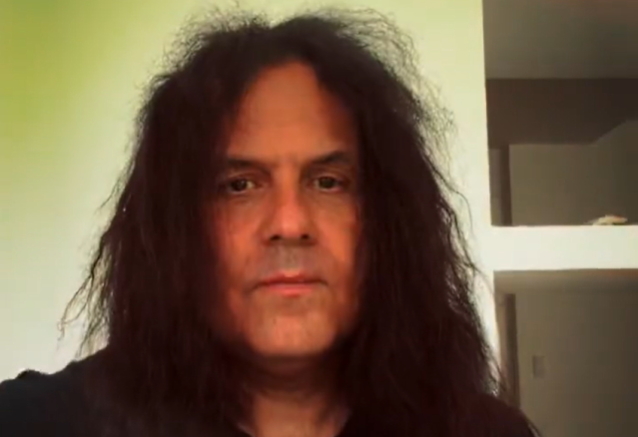 In a new interview with El Cuartel Del Metal, KREATOR frontman Mille Petrozza was asked if he pays attention to what fans have to say about his band's music on social media, especially after releasing a new album. He responded (as transcribed by BLABBERMOUTH.NET): "I know I shouldn't do this, but the band KREATOR is so important for me, and also it's important to know what our fans think of the music. First and foremost, of course, we have to love the music. And I totally get why… You cannot be loved by everyone. KREATOR wouldn't be KREATOR if all of a sudden the whole world would love what we do. That's not how things work. If you have a unique sound, there will be people that [say] it's not what they expected [laughs] — which is fair enough.

"But to answer your question — do I listen to comments? I shouldn't but I sometimes do," Mille admitted. "But then, on the other hand, I know that… It would be bad if people wouldn't care at all. If people are disappointed about some of the songs or the direction we're taking just means that they care. If people still care and they still feel offended that we have… For example, on the new album ['Hate Über Alles'], we have a female singer and some people were, like, 'Yeah, it's not thrash.' Whatever. [Laughs]"

Pressed about whether that influences his songwriting, Mille said: "No. No, no, no, no, no. That fuels the fire, really. We do wanna be KREATOR and we do wanna enjoy what we do. When I go into the studio, we have all this great technology and these tools and we have these great people that we're working with. And in the studio we're so creative and we don't follow any rules. Why would we? I didn't get into metal to follow the rules of some elitists that tell me what metal is about. The moment that happens I'm gonna just quit because that would be so wrong.

"I like the fact that people have opinions — don't get me wrong," he clarified. "But I also have my own opinion and I have my own view and I know how KREATOR should sound. And we do it with passion and we do it with honesty and we're straight up. We love thrash metal, we love all kinds of metal, and we love all kinds of music. It's what we do. And you can't be everyone's darling."