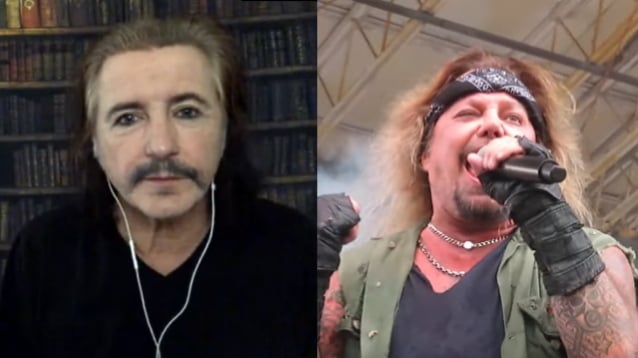 L.A. GUNS' Phil Lewis has weighed in on Vince Neil's disastrous comeback performance at an Iowa festival six months ago.

On May 29, the MÖTLEY CRÜE singer struggled to complete his solo concert at the Boone Iowa River Valley Festival in Boone. Based on fan-filmed video footage of the gig posted on YouTube, the 60-year-old rocker, who hadn't performed in more than a year and a half due to the COVID-19 pandemic, began losing his voice several songs into his set, which consisted exclusively of CRÜE classics and cover songs previously recorded by the band.

Lewis discussed Neil's return to the stage during a brand new interview with "The Bay Ragni Show". Speaking about how he has been staying in shape while off the road during the pandemic, Phil said (as transcribed by BLABBERMOUTH.NET): "I've got lungs — I've got lungs for days. I'm a runner, so I've always had a big lung capacity and a loud, annoying voice. So, those things have really, really served me well. And [I am regularly] on the rowing machine, getting the stamina going, because — I wouldn't say I'm in training, but not doing anything for two years, I don't wanna get shocked. I don't wanna get… Like a couple of guys who'd come out and they're halfway through their set, and they're, like, 'Oh, fuck. I'm completely out of shape. I haven't done this in so long.' Well… You saw… You know who I'm talking about. And it was pitiful to see the lead vocalist of 'The Stadium [Tour]' headliner not able to make it through fucking four songs. C'mon! As a frontman, as a singer, you have a fucking responsibility to step it up, especially if you're that fucking big. So, no fucking sympathy from me whatsoever. It takes work. It takes discipline."

This is not the first time Lewis has bashed Neil. After CRÜE drummer Tommy Lee said in a 2020 interview that he and his bandmates tried — without success — to get Vince to sing some of the John Corabi-era MÖTLEY CRÜE material, Lewis chimed in on social media, saying that Vince "has trouble singing his own songs" and calling Neil a "total hack." The L.A. GUNS singer went on to write that he he "seen Vince live so many times" and insisted that he hates "to see people getting ripped off."

A short time later, Metal Sludge published an article headlined "L.A. Guns singer on Vince Neil's singing ability: 'Vince has Trouble Singing his Own Songs – Total Hack'", prompting Lewis to elaborate on his original comments. He wrote: "Just to be clear and in context. The subject was why doesn't Vince sing the Corabi era songs? Simple. He couldn't, doesn't have the range, power or motivation but thanks for pointing out [Vince] has sold more albums and tickets than me, Has a much bigger bank account and a gorgeous trophy wife so yes given those facts Vince must be a much better singer than I could ever be. Darn! There goes another MÖTLEY tour."

He added, "While we're on the subject. Somber Anniversary VN. Fuck you for killing my friend", apparently referring to the fact that Neil caused the tragic car accident in December 1984 that killed his passenger, HANOI ROCKS drummer Nicholas "Razzle" Dingley.

Two months ago, Vince revealed that he was trying out a new toning machine in an apparent effort to get in shape for "The Stadium Tour". The singer said he was using Emsculpt Neo, a revolutionary new treatment which supposedly builds muscle and reduces fat using both radio frequency and high-intensity electromagnetic energies.

Speaking specifically about Neil, Kovac added: "Let's see what Vince sings like and looks like when the tour goes out." MÖTLEY CRÜE bassist Nikki Sixx also said last year that Vince was "killing it" while working with "trainers" and "nutritionists" in preparation for "The Stadium Tour".