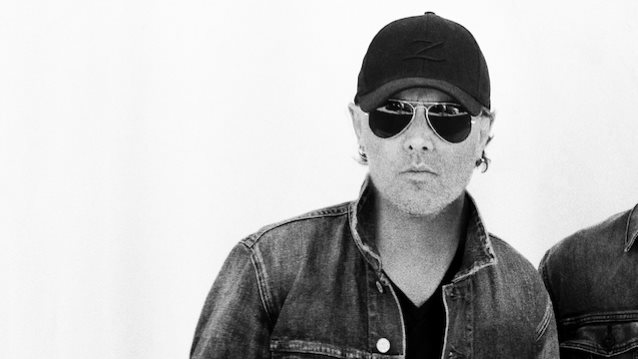 LARS ULRICH On METALLICA's Post-'Hardwired' Plans: 'We Just Wanna Get Back To Making Records And Continuing'

During a career-spanning interview on November 5 at 92Y in New York City, METALLICA drummer Lars Ulrich was asked where he sees the band five years from now. He responded: "We're on a roll. We're having the time of our lives. [METALLICA's latest album] 'Hardwired[… To Self-Destruct]' came out a year ago. Touring's great. The model that we've sort of set up for ourselves is a model that makes what we do work for us. And when I try to explain it to other people and other bands and so on, they often look at me like… We do everything very sporadically. We finished [the most recent European leg of our tour] in Belgium two days ago; we were out for two and a half weeks in the trenches, hitting hard, and now we have a couple of months to sort of recharge our batteries.

"We're gonna keep playing the same amount of gigs on this tour that we have on previous tours, but we just do it over a longer period of time," he continued. "So five years from now, I would say that… We've got hopefully a couple of years left of touring on this record. And then we just wanna get back to making records and continuing.

"There's absolutely no reason for any of this to slow down other than physical ailments," he said. "Shoulders, necks, knees, throats — all that stuff — if all that stuff stays healthy, up here [points to head] we're fine, as mental as ever. But if we can stay physically healthy, we should hopefully be able to do this for another 20 years. So hopefully five years from now, we'll be deep into making the next record."

Ulrich told the WJRR radio station earlier in the year that producer Greg Fidelman was at least part of the reason for the overwhelmingly positive response to "Hardwired… To Self-Destruct". "Greg, who engineered this record, who co-produced it with James [Hetfield, guitar/vocals] and I, who was responsible for all the sonics and the mixing and all that, he's been with METALLICA now for over ten years. He knows us, and he knows how to make us sound the way we should sound and maximize kind of our thing. And I think that he's a significant reason for all the goodwill that's coming back our way in the last [12] months since this record came out."

In a separate interview with HardDrive Radio, Lars said that "you can never discount the energies of the universe and how things are aligning and the right record [being released] at the right time" when it comes to the response to an album. "If this record came out two or three years ago, maybe it wouldn't have been received [as well]. Do you know what I mean? There's something about the musical landscape — what everybody else is doing, how your record correlates to what everybody else is doing and so on. So it's a lot of those factors."