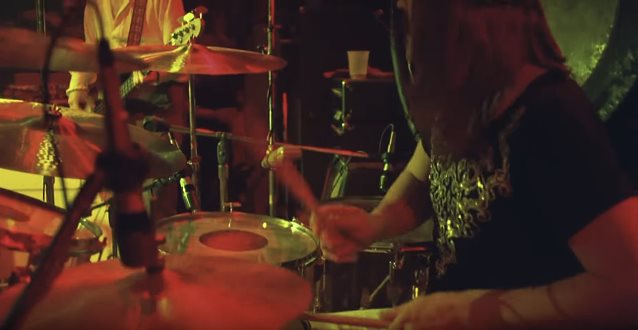 Legendary LED ZEPPELIN drummer John Bonham will be honored with a statue in his hometown of Redditch.

The Redditch Advertiser reports that most of the funds for the memorial, by renowned British sculptor Mark Richards, were raised through a private donation.

The memorial will have an arc-shaped footprint and be approximately 180 centimeters high (at its highest point),490 centimeters wide by 125 centimeters deep and weigh more than 2,500 kiograms.

The statue has the support of the drummer's sister, Deborah, who voiced her approval in a video interview. "How absolutely thrilled I am that this is happening in Redditch," she said. "We just got planning permission, so I'm absolutely thrilled; we're going to have a John Bonham memorial — brilliant."

The bronze statue will be unveiled in time for what would have been the late LED ZEPPELIN drummer's seventieth birthday next May.

LED ZEPPELIN bassist John Paul Jones said that while some people mistook Bonham's powerful drumming style as a lack of control and technique; that was far from the case. "He wasn't musically out of control in any way," he said. "He knew just what he was doing. But he could take chances — as we all did in those days. Just take a lot of chances on stage. And it was great: sometimes it comes off, sometimes it don't."

After years of campaigning, John Bonham's sister Deborah has finally got permission for a memorial to him in Redditch town centre. pic.twitter.com/FjfUTd2x8a