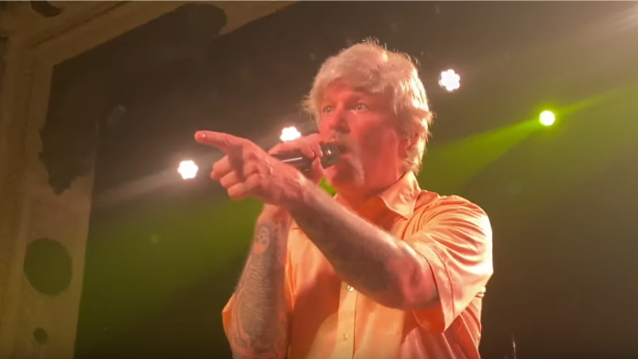 Front-row fan-filmed video footage of LIMP BIZKIT's July 29 concert at Metro in Chicago, Illinois can be seen below.

Just hours before last night's concert, the 50-year-old, who was best known for wearing baggy clothes and an iconic red backwards cap during the height of the band's fame, posted a picture of his new look on Instagram, writing in a caption "Thinking about you 70," alongside an emoji of a flying saucer. His Instagram profile bio has also been updated to read: "You're confused? Classic."

During a recent appearance on "Drinks With Johnny", the Internet TV show hosted by AVENGED SEVENFOLD bassist Johnny Christ, Wes Borland discussed the status of LIMP BIZKIT's long-awaited new album which at one point had the working title "Stampede Of The Disco Elephants". He said: "We've probably, in the last 10 years, been in the studio to try and complete the record, I wanna say, seven times, to different studios. And we've been working on stuff, working on stuff, working on stuff. And Fred has been consistently kind of unsatisfied with where vision is, I guess. So we've released singles — like we did 'Ready To Go', and we did another single called 'Endless Slaughter' that we put out… We probably have 35 songs recorded instrumentally, and he's done vocals on them and then thrown the vocals away — done vocals and then [gone], 'Fuck this,' [and] thrown it away. So I think he's finally at the point now where he's gonna pick a set of these songs that he's finally cool with and finish 'em and we're gonna finish the record. So, fingers crossed."

Asked about a possible timeline for the completion of the new LIMP BIZKIT LP, the guitarist said: "I'm not in charge of Fred's vocals… I'm way done with my parts on the record. I'm sure I'll go back in and play a little bit more after. But it's fucking Fred Durst. He went from being a darling to everybody's most hated person in the world. We broke up as a band. He's tried to find his footing, I think, on a bunch of these songs. He's so talented, and I love him so much as a brother, but if he's not ready to do it, he's not ready to do it… My whole thing is I force things, but I'm happy to make mistakes and get embarrassed and go, 'Oh, I shouldn't have done that.' But I just like to put stuff out. But he's a perfectionist, so we'll see when he's ready to do it. I doubt it'll be called 'Stampede Of The Disco Elephants' at that point. I will definitely say that the riffs and the music, it's the best stuff I've ever done as a musician, I think. I'm so pleased with the direction the music went, and I love what we did as a band. And I've heard a bunch of his, sort of, demoed vocals over the stuff, and they're great. So I have no doubt that he's gonna come and bring it and it's gonna be a great record."

Since the arrival of "Gold Cobra" 10 years ago, LIMP BIZKIT issued four singles and promised to release a full-length collection of new material.