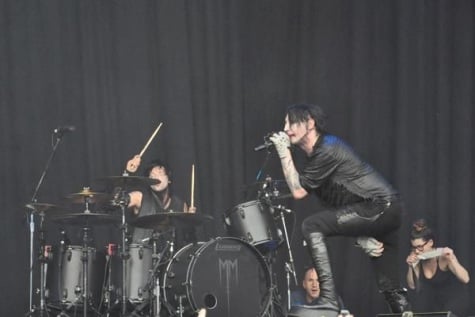 Drummer Jason Sutter, the most recent addition to MARLYN MANSON's touring lineup, has unveiled a brand new, all-black, custom-built drum kit during the first of his shows with the band.

The "Sutter Manson Born Villain Set" is a Ludwig Legacy kit in a semi-matt Eggshell Black with black powder-coated hardware. The kit's Paiste cymbals are the company's 2002 Alpha series in Black Colorsound. Jason recently signed a new endorsement deal with Regal Tip sticks and is using his Signature series throughout the MANSON world tour. He uses DW Drums 9000 series including the brand's 9000 double pedal and Remo drumheads in black finish.

An accomplished touring musician who performed with Chris Cornell for three years as well as FOREIGNER, NEW YORK DOLLS and VERTICAL HORIZON, to name just a few, Los Angeles-based Jason took the MANSON gig at the end of 2011 after Chris Vrenna decided to step down from the role. He recently told Jerome Marcus at Mikedolbear.com, "I only found out I had an audition the day before. I had already started learning songs just in case but I still only had a few hours to learn three more and get my drums to the audition when I found out. It was one of the more hectic ones I've experienced!"

The kit was made specifically for Manson's 2012 "Born Villain" tour which is currently taking Jason across Australia for the touring Soundwave Festival. Jason and the band then head to Japan and Taiwan for shows before returning to the U.S. for a headline tour. Spring/summer 2012 is shaping up to be a mammoth run of both festival and headline dates across Europe.