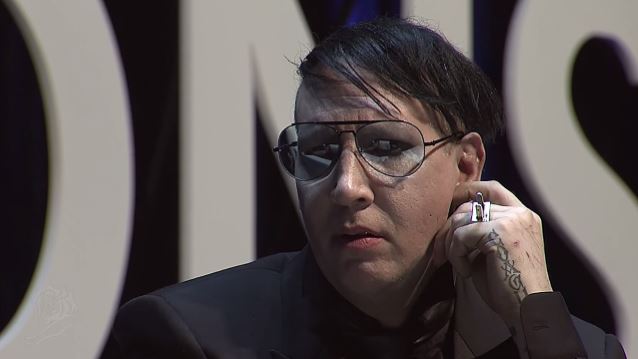 Marilyn Manson says that being accused of inspiring the perpetrators of the Columbine High School massacre to commit their killing spree "really shut down [his] career entirely," to the point where he could not get any gigs.

After Eric Harris and Dylan Klebold walked into Columbine High School in 1999 and murdered 12 students and one teacher, media outlets falsely reported that the killers were affected by Manson's music, causing the singer's career to take a dive. Manson, who was on tour at the time with his band, decided to cancel all remaining North American shows "as a show of respect for those killed."

During an appearance Monday, June 22 at agency Grey's annual music seminar during the global advertising festival Cannes Lions, the shock rocker opened up about his decades-long troubled relationship with the media. He said (see video below): "I think that having an avatar doesn't make you have an identity and having a persona online doesn't make you a personality either. So, when everyone could be famous, to me, it's not a challenge; it makes it even easier. It just makes the best rise to the top. If everyone could make music, they'd make better music. If everyone could be famous, and be naked, or whatever they wanna do, to get that fame…"

He continued: "It really goes back to the very beginning [and the origins of] the name Marilyn Manson… [and the fact that] you could become famous for being a murderer, the same as a movie star. It goes to the Columbine situation. And a lot of people, I don't know if they know that… when Columbine happened, it really shut down my career entirely to the extent that casinos, gambling establishments refused to book my shows. And, strangely enough, I think it's almost unprecedented that… not only did I not do anything, they were not fans of mine. But I sat and watched it live on TV, and they said, initially, that they were wearing Marilyn Manson makeup and t-shirts. And then you find out later that they weren't. But once the wheels started spinning, Fox News started going…"

Manson added: "What a lot of people don't know is that… Because Marilyn Manson… The first money that I ever spent is that I trademarked the name 'Marilyn Manson' the same way as Walt Disney and Mickey Mouse. It's not a stage name. It's not my legal name. It's… Marilyn Manson is owned by Brian Warner, my real name, in case you didn't know. And I put a cease-and-desist on all of the press, and I didn't do any interviews for Columbine, because I didn't think it would add to… I thought it would give 'em exactly what it did; it put the two guys that did the crime — allegedly, or we don't really know, but at least we know, we've seen that they definitely shot people and were batshit crazy — on the cover of Time magazine. I've never been on the cover of Time magazine, and that was the whole point. I said, 'You're giving them exactly what they want.' Just like Charles Manson was on the cover of Life and so was Marilyn Monroe. And so was Lee Harvey Oswald."

Manson's new album, "The Pale Emperor", was released on January 20 via the shock-rocker's own label — Hell, etc. — in a joint venture with Cooking Vinyl and Loma Vista Recordings.