MASSACRE: New Song 'As We Wait To Die' Available For Streaming

Resurrected 1990s Florida-based death metallers MASSACRE will release their long-awaited comeback album, "Back From Beyond", on March 24 in Europe and April 1 in North America via Century Media Records. The CD was recorded and mixed by Tim Vazquez of CGM Studios in Altamonte Springs, Florida, and features original MASSACRE members Rick Rozz (guitar; ex-MANTAS/DEATH) and Terry Butler (bass; OBITUARY, ex-DEATH/SIX FEET UNDER),as well as Ed Webb (vocals; ex-DIABOLIC/EULOGY) and Mike Mazzonetto (drums; ex-PAIN PRINCIPLE). The cover artwork was created by Toshihiro Egawa (CRYPTOPSY, KRISIUN, DEVOURMENT) and can be seen below.

Comments Butler: "MASSACRE is very excited and proud of our new album, 'Back From Beyond'.

"We've worked hard over the past few months and we believe that the old-school and new-school fans will be pleased.

"Ed Webb and Mikey Mazzanetto are great additions to the band and did an amazing job on the album.

"This is Florida death metal at its best!

"Back From Beyond" track listing:

The song "As We Wait To Die" can be streamed in the YouTube clip below.

MASSACRE released a seven-inch single, "Condemned To The Shadows", on July 30, 2012. The single, which is available as a regular black-wax version, a transparent wax limited edition and a yellow-wax limited edition, contains two brand new songs — "Succumb To Rapture" and "Back From Beyond" — that were recorded in February 2012 at CGM Studios in Altamonte Springs, Florida with Tim Vazquez at the helm. 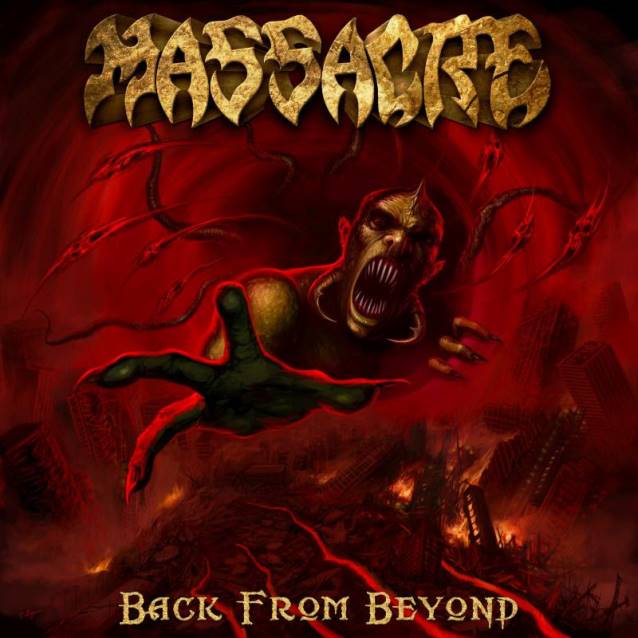