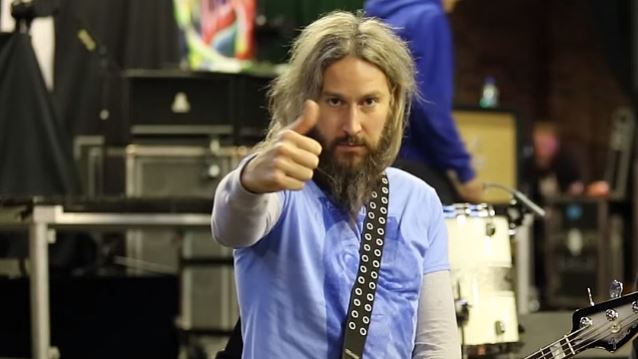 MASTODON's SANDERS: 'METALLICA Is A Giant Reason Why I Picked Up The Bass And Why I'm Where I'm At Today'

In a brand new interview with ARTISTdirect, bassist/vocalist Troy Sanders of Atlanta progressive metallers MASTODON was asked what his first meeting with METALLICA was like. He said: "It was a European festival. All I can remember is we were so excited our guitar player Bill [Kelliher, guitar] walked over to [METALLICA drummer] Lars Ulrich, whipped his dick out and put it in Lars's pocket. [Laughs]"

He continued: "I can't believe we've done so many tours with them since. In the following years, we played Wembley Stadium in London in front of a hundred thousand people with them. I just remember being so happy."

Sanders added: "METALLICA is a giant reason why I picked up the bass and why I'm where I'm at today. Now, we're supporting them in front of a hundred thousand people at Wembley Stadium. That was magnificent. This summer we get to play another string of dates with them. It's just MASTODON and METALLICA across Russia for a couple of shows. If you flashback and told 13-year-old Troy this information, my head would've exploded."

As previously reported, MASTODON is working on a video for the song "Asleep In The Deep", taken from the band's current album, "Once More 'Round The Sun". The group is collaborating with Atlanta-based special effects guru Shane Morton and renowned American artist Skinner (cover artist for "Once More 'Round The Sun") on what is being described as "a short film that will feature bizarre imagery and psychedelically hued, possibly disturbing and disorienting concepts, starring cats."

MASTODON will re-release all of its Reprise titles on vinyl in the coming months. The first album in the series is 2006's "Blood Mountain", which was issued on March 3 on a mix of solid yellow and transparent green vinyl.