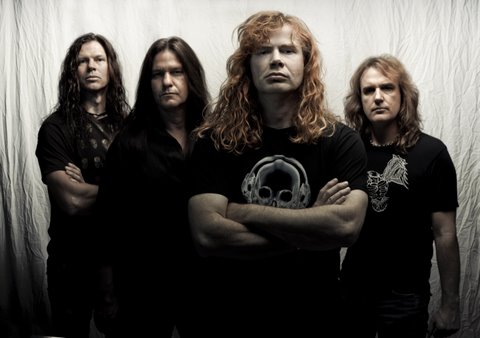 MEGADETH Mainman Is Not Holding His Breath For GRAMMY Victory

MEGADETH is among the nominees for the 54th annual Grammy Awards, which will be held on Sunday, February 12 at Staples Center in Los Angeles. The band's tenth Grammy nomination is for its new single, "Public Enemy No. 1", off MEGADETH's latest album, "TH1RT3EN", which came out on November 1.

"Public Enemy No. 1" actually marks the second Grammy nomination for music from "TH1RT3EN", as the song "Sudden Death" was first unveiled in the 2010 video game "Guitar Hero: Warriors of Rock" and received a "Best Metal Performance" nod.

When Attention Deficit Delirium's Bryan Reesman spoke to MEGADETH mainman Dave Mustaine last week, the guitarist/vocalist was happy and hopeful for victory over this year's heavy rock nominees, but not exactly sitting on the edge of his seat.

"The novelty's kind of worn off after all these nominations and not winning, and seeing people picked in our category that weren't really metal bands," Mustaine said. "It's kind of weird because I figure if I'm voting for all these people and don't know who they are, I would vote for a name that is most familiar to me. I've seen all the categories, and sometimes they've got Bahamian bands and Mexican spoken-word stuff… I'm just being funny. I still look forward to one day winning a Grammy. This year would be great. Unfortunately, I'm not going to be there because we're out on tour right now, so it would be just my luck that I win it the one time I'm not there."

When asked if a younger Dave Mustaine even contemplated winning a Grammy, Dave said, "Of course. I thought about it when I got the first nomination, and it got kind of disheartening after awhile. I guess I had hoped I would've won by now. I don't have a place cleared off for it that I have been dusting for the past 20 years, but it would be really great. We've already been picked by our peers, which is an accomplishment in itself. Now we'll see if it goes all the way through."

The nominees in the "Best Hard Rock/Metal Performance" category are as follows:

To be eligible for nomination, an artist's work must have been released between October 1, 2010 and September 30, 2011.

For a complete list of nominees, go to this location.