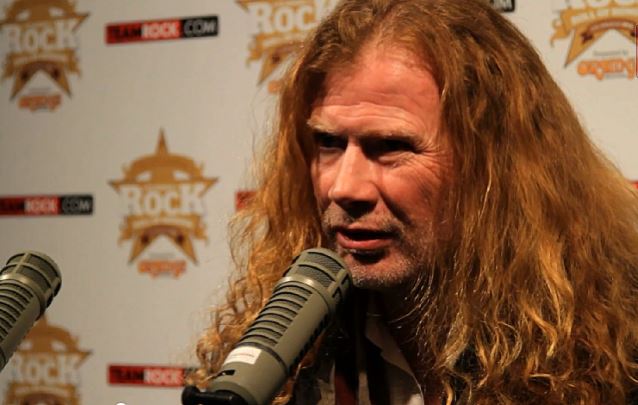 MEGADETH mainman Dave Mustaine has revealed that the band is gearing up to start work on the follow-up to 2013's "Super Collider" album. Speaking to Nicky Horne, host of the "Classic Rock Magazine Show", at at Tuesday night's (November 4) Classic Rock Roll Of Honour event at the Avalon in Hollywood, California, Mustaine said: "We're commencing the writing process right now and we're going to start [recording] in January of next year. We'll be touring in August with a very huge English metal band in the States and South America, and we're hoping to get our record out sometime in the summer."

In an March 2014 interview with National Rock Review, MEGADETH drummer Shawn Drover was asked if the band will venture into new musical territories on its next studio album. "I don't think so," Drover replied. "We definitely branch out to a couple of different areas, stylistically speaking."

He continued: "For me, I'm always an advocate for the heavy stuff, so that's usually what I present to the band — something a little more violent, a little more heavy and oftentimes fast stuff. Because that's how I write. Of course, MEGADETH has done so many different kinds of metal over the years, but for me, I'll always try to represent the more furious side of it, because that's just part of who I am, it's part of my creative DNA to try to write heavy riffs. Whether it gets accepted not, it obviously just depends on how it's going [with the writing process for] the record. We all have so many ideas, not everything is gonna make it. Case in point, on the 'Endgame' record, I had a song called 'Head Crusher', which was a pretty fast, heavy song. It was the first single, the first video and it was nominated for a Grammy Award. So you always try, but you just never know what you're gonna end up with. It just depends on how the recording process goes. But I'll always have ideas to submit, certainly."

During a December 2013 chat with MetalTitans.com, MEGADETHbassist David Ellefson commented on the criticism that was levelled against "Super Collider". "We're aware of the comments, for sure, because they're on our own web site or our MEGADETH Facebook page!" he laughed. He then added: "My personal thought is that the next record will be much different.

"We go through these phases. Dave [Mustaine] made three records when I wasn't in the band, and a couple of them quite good, I might add. They were good records because they were really good 'metal' records. That's what fans want to hear; because MEGADETH has this 30-year career, we have more than just one style in our cache.

"Fans have discovered us at various times throughout our journey; there are fans became fans when they heard 'Risk', that's when they go into rock 'n' roll and they bought their record, and to them, that is their debut MEGADETH record.

"I have learned not to criticize our own work, simply because there are naysayers out there and the fact that every record has significance to different people. Having said that, the first thing that people heard from the record was track 'Super Collider', which is a very mainstream, commercial song. I think had they heard 'Kingmaker' first, for instance, the reaction would have been much different.

"I'm a fan. I used to buy KISS records as a kid and CHEAP TRICK records. I remember some records, I got it right out the gate, and there were records where I'd say, 'What the heck is this?' It wasn't what I was expecting. Some records take one listen, other take three or four listens other more. I think, for me, 'Super Collider' is one of those records."

"Super Collider" sold 29,000 copies in the United States in its first week of release to land at position No. 6 on The Billboard 200 chart.