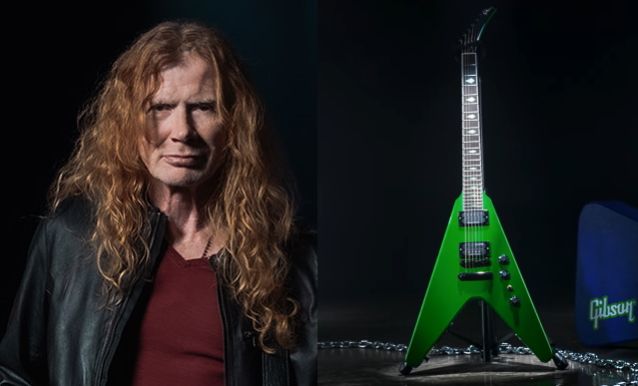 Gibson has announced the limited Dave Mustaine Flying V EXP Rust In Peace. Named after the album that set a new standard for heavy metal, this guitar will rock you out of this world with its Alien Tech Green finish.

For more information about the Dave Mustaine Rust in Peace, go to this location.

Gibson is truly honored to be working with Mustaine, a guitarist, songwriter, and bandleader who formed MEGADETH at the dawn of the American thrash metal movement. Mustaine has sold 38 million records worldwide, earned six platinum albums, and is a Grammy Award winner, cancer survivor, and a certified first degree black belt in Ukidokan Karate, and Songahm Taekwondo, an honorary fourth degree black belt and Goodwill Ambassador in the World Taekwondo Federation, and is currently on the way to a first degree black belt in Gracie Barra Jiu-Jitsu.

In February 2021, Gibson officially announced a new partnership with Mustaine, who joined the company as a Brand Ambassador. The new Dave Mustaine Collection will span acoustic and electric guitars across Gibson, Epiphone and Kramer.

MEGADETH recently completed work on its 16th studio album, "The Sick, The Dying And The Dead", for a tentative September 2022 release.