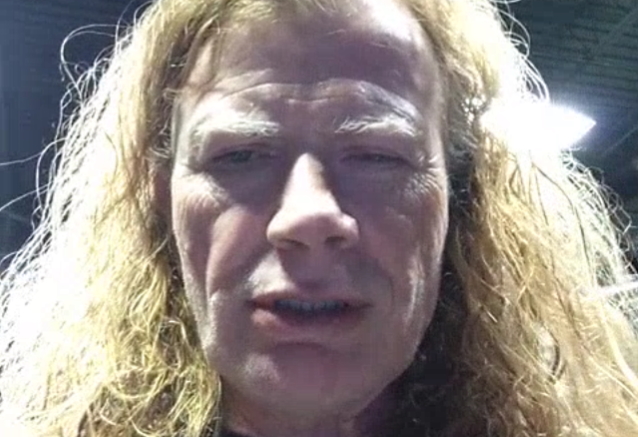 MEGADETH's Dave Mustaine took part in a special in-store bottle signing and tasting on Saturday, August 14 at Frugal MacDoogal in Nashville, Tennessee. Video footage and photos of the event can be seen below.

The signing and tasting was open to the public, free of charge, and featured tastings from a variety of styles and vintages from the House Of Mustaine limited wine collection, including She-Wolf Merlot Rosé, Almost Honest Cabernet Sauvignon and Darkest Hour Syrah.

Attendees had to be 21 and older and show proper I.D. to participate in the wine tasting, and for purchase of alcohol. For those under 21, merch items and posters were made available for Mustaine to sign. There were also special giveaways brought to you by Epiphone and 5B Artist Management, including the chance to win a signed Epiphone Les Paul Special VE Guitar in cherry, plus tickets to the nearest "The Metal Tour Of The Year" show — featuring MEGADETH, LAMB OF GOD, TRIVIUM and HATEBREED — in Cincinnati, Ohio.

"The Metal Tour Of The Year" is scheduled to kick off on August 20 in Austin, Texas. It will be MEGADETH's first appearance in the U.S. since 2017, and LAMB OF GOD's first live performance since the release of its self-titled album in May 2020. Produced by Live Nation, the rescheduled trek will hit a further 27 cities before wrapping in Quebec City, Quebec, Canada on Saturday, October 2.

Playing bass for MEGADETH during the tour will be former member James LoMenzo.

Mustaine has yet to reveal who played bass on the new MEGADETH album after Ellefson's tracks were removed from the LP following his dismissal from the band in late May.

In June 2019, Mustaine announced that he was battling throat cancer. After 51 radiation treatments and nine chemotherapy sessions, Mustaine told fans in late January 2020 at the SEE Arena in London that he was cancer free.

I met Dave Mustaine of Megadeth yesterday! Very awesome moment in my life

Dave Mustaine in town yesterday promoting his wine at Frugal McDougal in Nashville.