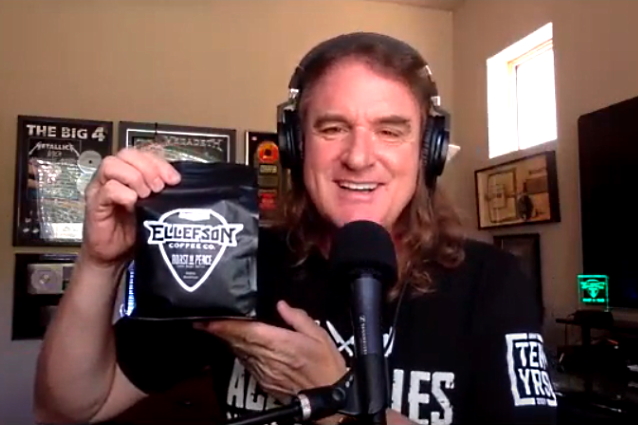 MEGADETH's DAVID ELLEFSON Has Changed The Way He Drinks His Coffee

In a new interview with the "Meet Me For Coffee" podcast, MEGADETH bassist David Ellefson, who launched a boutique coffee brand called Ellefson Coffee Co. a few years ago, was asked how he takes his coffee. He responded (see video below): "Now I'm drinking it with extra-thick oat milk. For years, I drank it with half & half, and I'd never had any real dairy issues.

"I have a doctor friend of mine, who says, 'Look, all humans are lactose intolerant, because you're not supposed to drink the milk of another species.' [Laughs] He said, 'Look, some people, it hits you right away, sometimes the middle of your life, sometimes never, but just know that humans are lactose intolerant to a cow's milk.' And I just started noticing kind of an acid reflux thing, 'cause I do a lot of interviews, I talk a lot, I sing, of course. So I found the oat milk keeps it real clean. And I don't like thin oat milk, 'cause I like it to be kind of nice and creamy. I did go through a phase a couple of years ago where I was just drinking it black. And I actually don't mind that so much now, especially now that I've been tasting different coffees.

"A lot of our [Ellefson Coffee Co.] artist roasts that we do — [there's one] for me and Frank Bello [ANTHRAX]; we do one for SKID ROW; Eddie Ojeda from TWISTED SISTER; we roast for these artists — and generally those are a darker… Roast In Peace is our dark roast. But it's kind of a modest dark roast — it's not too bitter or anything. The artist roasts tend to be a little bit darker in that they're actually more of an Italian coffee. So what I found when I was flavor matching some of the stuff was that when you taste it without any cream or anything in it, it has one flavor. And then when you put milk or any additive to it like that, it changes literally the chemical balance of it.

"My chef friend Jon-Paul Hutchins is an instructor at Cordon Bleu, so he really knows coffee. He knows food. He knows how to blend wine, coffee, desserts, all the fish, all these things. So he was there, and he really walked me through the process. And he said, he goes, 'So now you notice when you put the cream in, that would work really well with the crème brûlée. Not so much with a chocolate cake, but a crème brûlée.' And I was, like, 'Wow!' It just opened my eyes to a whole other dimension of coffee.

"As you travel the world, and, of course, the Italians, they're very particular about their coffee, and they serve very small, little quick shots that you can just pop 'em back. And it's more of that — it's kind of more just like a quick 'bang, let's get going.' Not so much sitting down to enjoy a big 12- or 16-ounce cup of coffee, like we do in Canada and the U.S."

In early 2017, David opened the first brick-and-mortar Ellefson Coffee Co. shop in his former hometown of Jackson, Minnesota. The shop has since permanently closed.

Ellefson explained his relationship with coffee and mission on the Ellefson Coffee Co. web site. "My love for coffee has accompanied me around the world for my entire musical career," he said. "Just like the spirit of a culture or the melody of a song, the enjoyment of coffee brings people together and creates harmony among us. The beans in this bag are traceable to their global origin and exemplify the spirit and culture of the people who grew them. It is my aim to bring this roast to our tables and awake our taste buds, fire up our rock n roll spirits and continue the global fellowship of music, art and coffee. May you Roast In Peace!"

Ellefson grew up on a farm in Jackson but has lived in Scottsdale, Arizona since 1994.