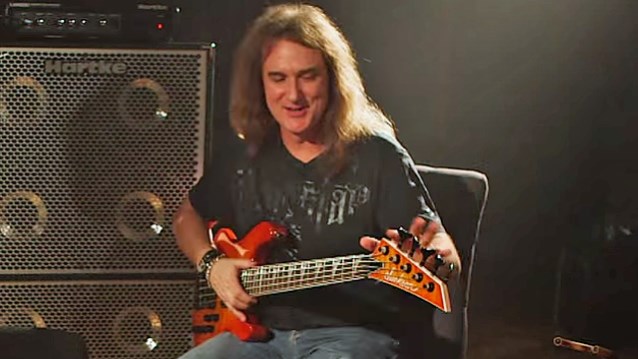 MEGADETH's DAVID ELLEFSON: 'STEVE HARRIS Really Opened My Eyes To What A Bass Player Could Do'

In a brand new interview with TheMusicBiz.org, MEGADETH bassist David Ellefson was asked how he managed to develop a distinctive bass style at a time when no one quite knew how to be a metal bass player, especially in terms of thrash.

"Well, y'know, for me, I grew up on a farm in a very rural part of the United States, in Minnesota," he responded. "The music bug came on me; it lit me up. I felt alive and like I had a purpose, so I looked for every opportunity and every person I could play with. I would play with the church acoustic guitar player, I'd play with the third-grade band teacher. I was 12 and getting asked to join bands with guys who were 16 years old and knew every LYNYRD SKYNYRD song. I would play with anybody and everybody. Then there came a time when I was in my mid-teen years where I was playing in a jazz band in high school and listening to Jaco Pastorius, WEATHER REPORT, Spyro Gyra, Al DiMeola. Anything I could get my hands on to play. Largely, I went well out of the school of rock and roll to develop my skills. And so by the time I was 18 and I graduated high school and moved to California and met Dave [Mustaine, MEGADETH mainman], certainly by this time IRON MAIDEN had come out, and Steve Harris had really opened my eyes to what a bass player could do."

He continued: "I knew of bass players who were singers and songwriters, like Geddy Lee [RUSH] and Gene Simmons [KISS], but for Steve to be the bass player and a songwriter but not a singer was very intriguing to me. And I liked it because I was never a good lead singer. I sang backups in a few bands. I sang lead a little as a kid, but I never had a good lead vocal voice. But I'm the Michael Anthony [VAN HALEN], a good back-up singer guy, y'know? Like the harmony in 'Peace Sells', that was me going for that. I jumped on what I call the Michael Anthony harmony. The high third and fifth. And that's just where I go when I'm singing harmonies usually."

Ellefson added: "So when I met Dave Mustaine, it's funny because the METALLICA stuff he was playing was always pretty complex but it was simpler, and MEGADETH, especially that first year in '83, we lived in Hollywood right by the Musicians Institute. And we were very influenced by this school and the students that were there. There was one guy we'd jam with, this guy Ed who would come over every day after school, and he was really big into Uli [Jon Roth of SCORPIONS], and me and Dave loved the early SCORPIONS stuff, and Dave was a big fan of Uli's guitar playing and Michael Schenker, and it really developed how progressive MEGADETH's early music was. And we took it to a whole other level of complexity. So all those years of growing up playing all these different types of music, playing in the jazz band and stuff, all those experiences were able to be brought together and harnessed basically to a blank canvas called MEGADETH where we created this sound and style. And certainly with Chris Poland and Gar Samuelson in the band, they were hardcore jazz fusion guys so that escalated my playing to another level.

"When people ask me what they should do as a musician is they should play with as many musicians as they can."

Ellefson is heading to Australia in March for a spoken-word tour. "An Evening With David Ellefson" will feature stories from life on the road and about life as a founding member of one of the biggest metal acts in the world, documenting all the trials and tribulations. The night will also feature a bass demonstration and audience question-and-answer session which will allow fans to delve deeper into all things MEGADETH and David's autobiography, "My Life With Deth", a story about the complex history of the band.

From MEGADETH's inception in 1983 until the band's temporary split in 2002, Ellefson was the only constant member other than bandleader Dave Mustaine. David was a pivotal part in MEGADETH's progression from a ferocious jazz infused thrash group to a state-of-the-art speed metal band and into a multiplatinum, chart-topping, global juggernaut.

After MEGADETH disbanded in 2002, Ellefson pursued a variety of projects, including playing with SOULFLY and forming the band F5, amongst other endeavours. In 2010 David rejoined MEGADETH for the 20th-anniversary tour of the band’s seminal, genre-defining classic "Rust In Peace". Since then, he has reclaimed his rightful place within one of heavy metal's most revered bands.

Through highs and lows, Ellefson has experienced the gamut of rock star fame, fortune and excess and lived to tell the tale. This is your only chance to get a personal insight into the history and behind the scenes of one of metal's most iconic bands, MEGADETH.