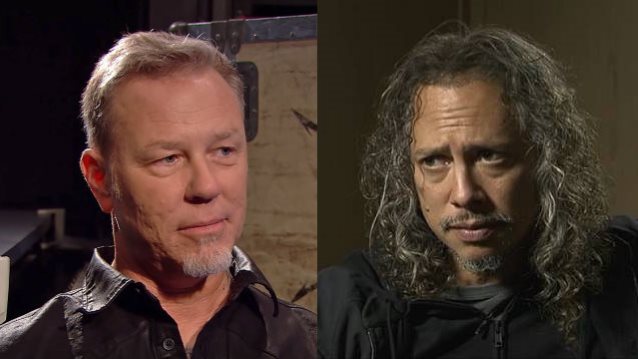 In a brand new interview with the U.K. radio station Planet Rock, METALLICA frontman James Hetfield spoke about guitarist Kirk Hammett's lack of songwriting contributions to the band's new album, "Hardwired… To Self-Destruct". Asked if it's true that Hammett lost his phone with hundreds of riff ideas for the follow-up to 2008's "Death Magnetic" record, Hetfield said (hear audio below): "I don't know. That's what he tells us [laughs], so I take that as the truth. No, he submitted some riffs. I mean, not 'submitted'… We all pile in our ideas, and they're in the giant METALLICA riff pile, and Lars [Ulrich, METALLICA drummer] is the one — since he's not writing any of the riffs — he sifts through 'em and he's able to identify 'em. He's got a great ear for the riff, and he'll hear things that I don't hear. I think, 'Hey, this riff is great,' and, 'Yeah, but what about this part of this one?' [And he says] 'Nah, it's not so good.' And, 'Let's take that…' So he's not a guitar player, so it's an unorthodox approach at picking riffs, which his great."

He continued: "But as far as Kirk… Kirk was not present in the studio. He was dealing with life. He had a lot of life things going on for himself, which he'll choose to talk about if he wants. But, you know, [it was] Lars and I steering the ship as usual, going through the riffs, creating the songs. And I got to do a lot of guitar stuff that I was missing around 'Death Magnetic' and 'St. Anger' — some of the harmony guitar things, harmony vocals… You know, a little more layering, like the 'Black' album."

Hammett said last year that losing his phone was a "devastating" experience. The iPhone containing about "250 musical ideas" went missing in 2014. About six months later, he told "The Jasta Show" podcast that he "was crushed" when it happened, but still expressed hope that it "might turn up." Last September, the guitarist spoke to Seattle's KISW 99.9 radio station about how the incident affected the making of the new record. He said: "Let's just say that I had to start at zero again while everyone else [in the band] had material for songs. By the time I got a few ideas flowing and kind of formed, most of the songs were already written. I had to think to myself, 'Okay, I have stuff, but it looks like it's gonna probably make it on to the next album.'"

METALLICA will head out on a major world tour in support of the set later this year, with North American dates rumored to begin in the spring.