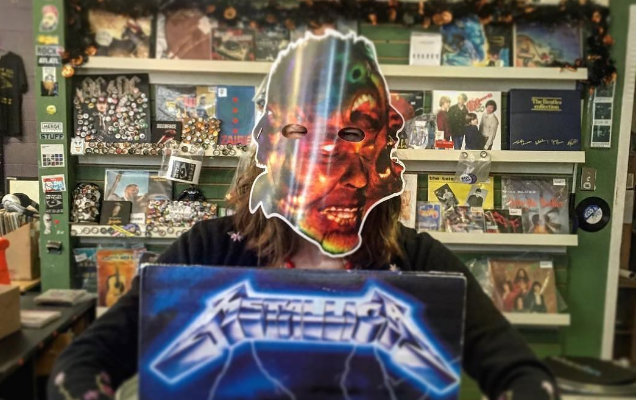 To help fans get into the Halloween spirit, METALLICA fans around the world can now visit select independent record stores for the chance to obtain a free limited-edition "Hardwired... To Self-Destruct" Halloween mask. Inside of each mask, fans will find a special access code that will allow them to hear the band's new song "Atlas, Rise!" 30 minutes prior to its official release on Halloween at 3:00 p.m. EST / 12:00 p.m. PST.

Several photos of the mask can be seen below.

"Atlas, Rise!" is the third track to be released from METALLICA's forthcoming album, "Hardwired... To Self-Destruct", due for release on the band's own Blackened Recordings on November 18 and follows previously released tracks "Hardwired" and "Moth Into Flame".

Heading out to your local record store to get your hands on a Hardwired mask? Make sure to post a photo of you wearing it w/ the clever hashtag of #MetallicaMask! We'll repost some of our favorites. ? #metallica #hardwiredtoselfdestruct #recordstore ? @discgoround

Have you picked up your free @Metallica Hardwired...To Self-Destruct Halloween mask yet? Find a participating store: https://t.co/WMl5mi4apwpic.twitter.com/tEuapldKhM

This is what the #Hardwired Halloween mask looks like. Thanks again to @Metallica for the goodies! pic.twitter.com/miyib9vVO3