METALLICA's JAMES HETFIELD: First And Only Unauthorized Biography Due In April

Lesser Gods has set an April 11 release date for "So Let It Be Written", the first and only unauthorized biography of METALLICA frontman James Hetfield.

Born in 1963 in Downey, California, James was the son of a truck driver named Virgil and a singer named Cynthia. Hetfield's parents were Christian Scientists and strongly disapproved of the use of any kind of medicine or medical treatments, even when Cynthia was dying of cancer in 1979. This upbringing inspired many of METALLICA's later songs, such as "The God That Failed". Hetfield also had two older half-brothers from his mother's first marriage and a younger sister.

Hetfield took up piano at the age of nine and began playing guitar at 14. He was in bands called LEATHER CHARM and OBSESSION during his teen years. In October 1981 he answered a classified ad placed in a local paper called Recycler by Danish drummer Lars Ulrich, and METALLICA was born.

Solidifying the lineup with bassist Cliff Burton and lead guitarist Kirk Hammett, who replaced Mustaine, METALLICA signed to Megaforce Records in 1983 and released its debut album, "Kill 'Em All", in July of that year, while also relocating from the Los Angeles area to San Francisco.

Pioneers and leaders of the underground speed metal movement, METALLICA signed with major label Elektra Records in 1984 just as they released their sophomore album, "Ride The Lightning".

Weathering the death of Cliff Burton in a tour bus accident in 1986, METALLICA became bigger and bigger, scoring their first gold album with 1986's "Master Of Puppets" and their first platinum disc with 1988's "…And Justice For All". The group became superstars in 1991 with the release of the self-titled "black album," which has sold over 16 million copies to become the biggest selling album of the SoundScan era of sales tracking.

While "St. Anger" received a mixed reaction from fans, the band came back full force with 2008's "Death Magnetic". Several years of touring and other projects followed, with METALLICA returning to the studio in 2014 to begin work on last year's "Hardwired… To Self-Destruct" album, widely hailed as the band's finest release in more than two decades.

"So Let It Be Written" does justice to the many hats Hetfield has worn, with his strong leadership, signature vocal style, powerful guitar playing and masterful songwriting. Author Mark Eglinton uses exclusive, firsthand interviews — with prominent rock stars and key figures in Hetfield's life — to construct the definitive account of Hetfield.

TESTAMENT singer Chuck Billy, who wrote the book's foreword, said: "Hopefully this book will rekindle certain special memories about one of metal's most charismatic and important individuals."

You can check out a sample chapter from "So Let It Be Written" by clicking on the book cover at LesserGodsBooks.com.

Eglinton is an author, journalist and film producer currently based in Edinburgh, Scotland who co-authored former PANTERA/DOWN and current KILL DEVIL HILL bassist Rex Brown's memoir, "Official Truth, 101 Proof: The Inside Story Of Pantera", and whose first book, titled "James Hetfield: The Wolf At Metallica's Door", was published in April 2010. 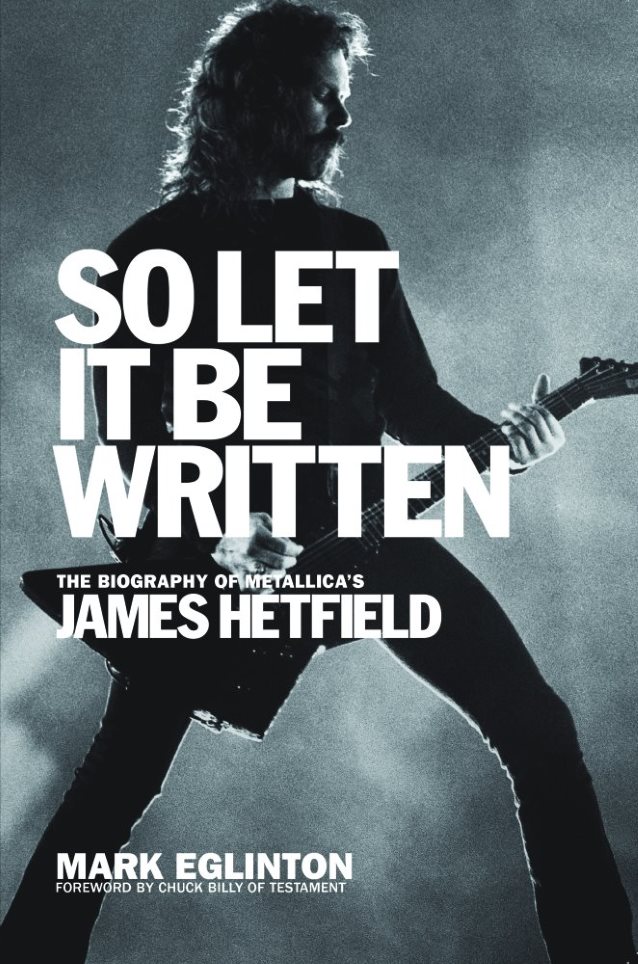