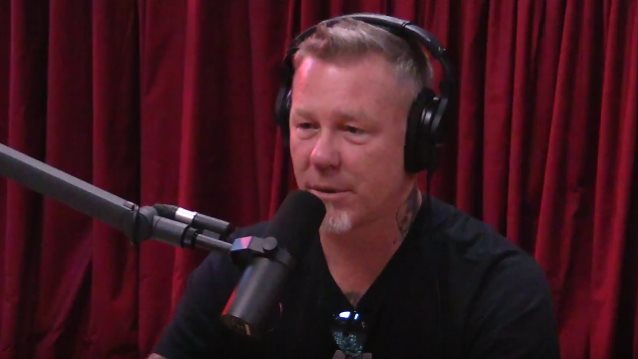 During a recent appearance on "The Joe Rogan Experience", the podcast hosted by UFC personality and stand-up comedian Joe Rogan, METALLICA frontman James Hetfield talked about his decision to relocate his family to Vail, Colorado from the San Francisco Bay Area, where he had lived since the early 1980s.

Describing his new home, Hetfield said: "It's quiet. [There's] no frigging traffic. Especially now — super quiet. Snow… Snow does something to calm you down a little bit.

"There's a lone-wolf part of me that maybe you can relate to. But I like being by myself. But I also need people to connect with as well.

"Moving from California to Colorado was a great thing for me. I feel really… I feel a part of nature there. And you don't wanna be inside there. There's something about it. You just wanna be outside all the time.

"We get to look at the Gore Range right out of our mountain. And I've drank plenty of Coors Lights in my life and that's the one on the can. Like, 'Wow! I'm looking at it.' And lots of fourteeners there [mountain peaks with an elevation of at least 14,000 feet], lots of great snowmobiling, rafting, paddleboarding… you name it."

Asked what made him and his wife Francesca — whom he met in 1992 when she toured with the band, working in the wardrobe department, and married in 1997 — along with their three teenagers, move to Colorado at this point in their lives, Hetfield said: "There's probably a multitude of things that made it happen. My wife grew up there. She was born in Argentina, they moved to Vail; she went to elementary school there. We were going to Tahoe a lot to do skiing and stuff like that. And she said, 'We've gotta go to Vail. This is not snow. We'll go to Vail and feel snow.' And we went there a few times, and I loved it."

He continued: "I'm not a huge skier, but I can ski and I have fun doing it. My kids love it. So that. My wife turns into a kid when we go there, which I kind of like. It's a little more like me. [Laughs] She can be a little [makes straight-line motion with his hand] — a little too 'on point.' You know, she loosens up and she becomes young again there. So there's that.

"I kind of got sick of the Bay Area, the attitudes of the people there, a little bit. They talk about how diverse they are, and things like that, and it's fine if you're diverse like them. But showing up with a deer on the bumper doesn't fly in Marin County. My form of eating organic doesn't vibe with theirs."

The 53-year-old Hetfield, who is a member of the National Rifle Association and an avid hunter, added that he increasingly felt unwelcome in a community where hunting was being frowned upon as a cruel and unnecessary act. He said: "It's something I felt. I probably made it up in my head a little bit. 'Cause I'm pretty good at that. I'm pretty creative, and I can start fights with myself in my head all the time. But there was. There was just a… I don't know… I felt that there was an elitist attitude there — that if you weren't their way politically, their way environmentally, all of that, that you were looked down upon. I think in Colorado, everyone is very natural; people are not playing some game, they're not posturing. They're very into, 'Oh, you like doing that? Cool. How's that go? How're you doing with that?' And they're less obsessed with stopping what you're doing and more enjoying what they're doing."

He continued: "I feel more at home in the Midwest or the mountains or something. I mean, I love the ocean, and I love the Bay Area, I love what it's got to offer, but there's just an attitude that it was… It wasn't healthy for me. [I was] starting to feel like I was just fighting all the time, and I just had to get out of my own head. So Colorado does it for me."

Hetfied also recalled how he felt when anti-hunters in Glastonbury, England, launched a petition drive in 2014 to keep METALLICA out of their yearly music festival because he was perceived to be an outspoken big game hunter and pro-gun advocate.

He went on to say: "For me, going out, whether it's planting my own vegetables, having my own beehives, getting our own honey, harvesting my own meat on the ranch, that's what I love doing. I love sustaining my family with as organic as possible. I respect people that don't want the blood; they don't want all that scene. They would rather see their meat, or whatever it is, show up in a nice cellophane package and it's handed to them; they don't wanna know how it got there. I respect that. My kids are like that — they don't wanna see it going on. But I wanna be as close to the earth, I wanna be as part of it as possible. I wanna be part of every bit of it and respect it."

Despite his decision to leave the Bay Area behind, Hetfield stressed that he is "glad there is a place" like San Francisco "that prides itself, on being progressive, very moving forward: 'Hey, we're creating the future here.' And I love the convenience and stuff of that. But then there's a part of me that just maybe is like frontier-style. I just love that. I would rather be simple."

METALLICA will be touring next year in support of its tenth studio album, "Hardwired... To Self-Destruct", the band's first all-new studio effort in eight years.

METALLICA recently played a smattering of charity club shows. Following one last small gig in Oakland last night (Saturday, December 17),the group is breaking for the holidays before heading overseas in January for shows in Asia, Europe and South America. The North American run is likely to start sometime in the spring.