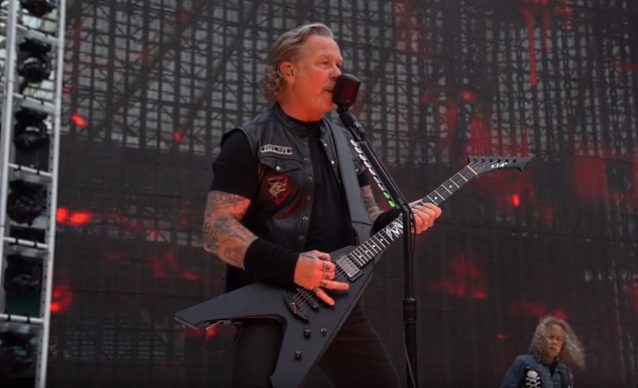 Professionally filmed video footage of METALLICA performing the song "Hardwired" on June 20 at Twickenham Stadium in London, England can be viewed below.

"Hardwired" is the opening track on METALLICA's latest album, "Hardwired... To Self-Destruct", which was certified platinum in April 2017 by the RIAA (Recording Association Of America). The platinum certification reflects a million equivalent album units, which blends traditional album sales, tracks sold from an album and on-demand audio and video streams.

METALLICA frontman James Hetfield told Guitar World: "'Hardwired' is the first song on the album, but it was actually the last song we wrote. In my mind, it's more of a summary of the whole album than an opening statement. Lyrically, I wanted it to be really simple, fast, quick and punk rock. The idea is to make it communal. You know, we're fucked. All of us. But we're blessed as well, because we're all in this together."