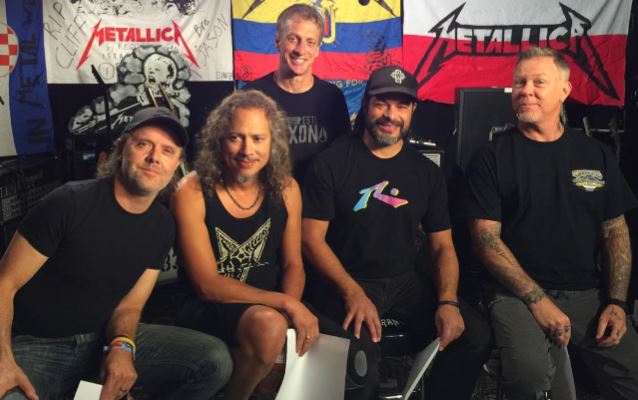 METALLICA To Perform At 2015 X GAMES In Austin

METALLICA will perform at the 2015 X Games, set to take place June 4-7 in Austin, Texas. The band's Super Stage headlining appearance is scheduled for June 6. Other artists who have signed on to play at the extreme sports showcase are Nicki Minaj, Talib Kweli, THE GLITCH MOB, Kid Ink, PENNYWISE, Deltron 3030 and Joywave.

In the RollingStone.com video below, METALLICA sat down with pioneering skateboarder Tony Hawk to announce their appearance. "It only makes sense that people who grew up on METALLICA are wanting to continue to skate and do the cool things that they do," METALLICA frontman James Hetfield told Hawk.

"It's awesome! We get to see our music inspire people all over the world and hopefully we’ll get to see our music inspire people," Hetfield added to RollingStone.com. "We're pretty jazzed. We're excited to get there and X Games has been going on for a while; it's about time! The music does something to you. When athletes are already really good and the music takes them to another place, you can't explain that."

"It always seemed like the skaters and the surfers were really connected to the music of METALLICA," bassist Robert Trujillo said. "The style and the way that I play, low center of gravity, has a lot to do with skating and surfing and even snowboarding. It’s kind of a natural thing for me. Fans are great everywhere." It isn't just extreme sports fans that rock to The Black Album band; recently, the San Francisco Giants celebrated their third annual Metallica Day with the group in attendance.

"There's a connection to those type of people. It's similar energy. You see at these events they're playing a lot of hard rock metal and punk rock," Trujillo added. "The tribe that followed that style of music is still around for the sports. These guys are listening to that music. It's important to them. It's a part of their lineage. I'm excited. One of the things I enjoy is hearing the music and seeing the skating. Seeing the two worlds working together at the same time."

METALLICA has spent a lot of time outside the studio in 2014, with activities that included a string of European all-request shows last summer, being guests of honor at a film festival, and playing a week-long residency on "The Late Show With Craig Ferguson".