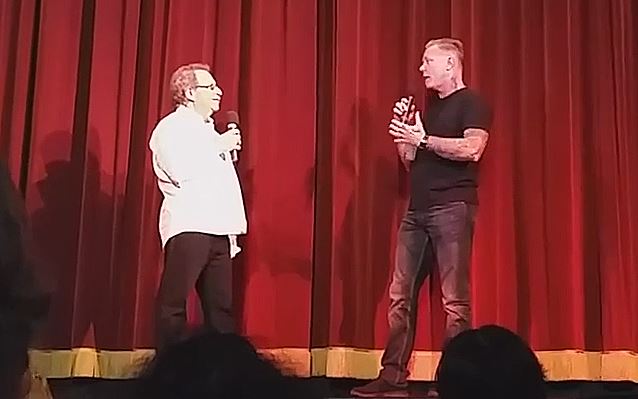 METALLICA's JAMES HETFIELD On 'The Good, The Bad And The Ugly' Movie: CLINT EASTWOOD 'Was The Coolest'

METALLICA served as Artists In Residence at the 37th annual Mill Valley Film Festival, which is taking place between October 2 and October 12 in the northern California city. Each of the band's four members hosted a screening of a film that they personally selected for the event.

On October 6, bassist Robert Trujillo hosted a screening of "Jaco", the documentary he helped produce about late bassist Jaco Pastorius.

Drummer Lars Ulrich took over on October 7 for a screening of "Whiplash", a new indie film about an aspiring drummer and his ruthless teacher that won multiple awards at Sundance this year. Ulrich also interviewed director and screenwriter Damien Chazelle after the film.

METALLICA frontman James Hetfield presented an October 8 screening of the classic spaghetti western "The Good, The Bad And The Ugly". The film's main theme as served as the opening music for METALLICA's live show for decades.

Speaking about "The Good, The Bad And The Ugly", Hetfield said during his intro question-and-answer session (see video below courtesy of Davai Report): "I don't remember the first time I saw it. I became a Clint Eastwood fan early on in my life, and it's one of those films that… [Clint's character was] one of the early mentors on screen that I kind of wanted to emulate… the tough, cool, quiet guy. I actually identified with each person in the movie — the ugly one, the good and the bad. Without getting too deep, but, yeah, metaphorically, we all have that in us, we all have the potential to be each one of those."

He continued: "What I liked about the movie, for me, was that each one of [the characters] had their own survival technique — how they navigated the desert, the war, just struggling through life… they all had their own way of doing their thing. And, you know, Clint was the coolest."

Hetfield also spoke about "The Ecstasy of Gold", the song from "The Good, The Bad And The Ugly" which has been opening METALLICA live shows since 1983. "There's a scene, 'The Ecstasy Of Gold' — maybe you've all seen it, maybe you haven't — but towards the end, something happens, and there's a cannon and Clint… We kind of set that up in our… We've used the intro music from this movie since 1984, possibly… 1983," he said.

"We had this really terrible intro tape that was just this heart beating and it got faster and faster and faster, and then we came out. And our first manager said, 'That sucks. You can do better than that.' So he played us 'The Ecstasy Of Gold', and that was one of the coolest things that our first manager ever did. [Laughs] That was pretty much the only thing that we kept from him, advice-wise."

METALLICA's cover of "The Ecstasy Of Gold" was released in February 2007 via Sony Classical as part of a tribute to composer Ennio Morricone, also featuring some of the greatest names from the worlds of contemporary pop, rock, jazz, and classical music.