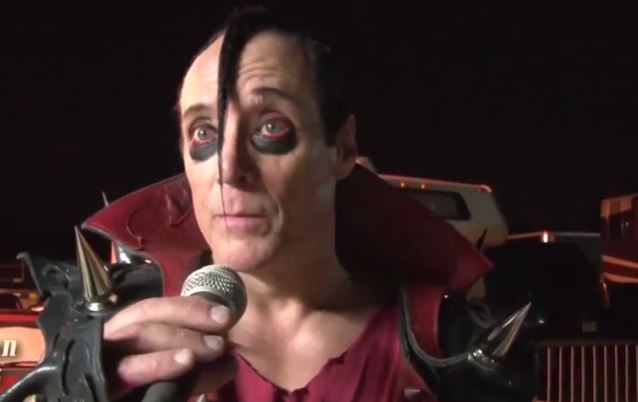 MISFITS mainman Jerry Only has revealed to Metal Hammer magazine that he is writing a book about his life. He said: "The book is basically about growing up when I grew up, in the '70s, and being able to get involved in the music scene that was taking off. [It will include] a lot of the tragedies — I'm actually writing a chapter about Sid Vicious [SEX PISTOLS] right now. I was there when he died."

He continued: "It's about understanding how things work, and how to get around obstacles without compromising your integrity. I think that's where we're at now. I'm at work right now — some people are out on their yachts when they're not on the road, and I'm in a machine shop."

Only added: "It's important to stand for something. If you can inspire people through your actions and the way you do things, then that's really the key to having a lot of class and allowing people to grow and learn from the things you've done."

Jerry told the Miami New Times in a 2013 interview that he had dinner with Sid Vicious and Sid's mother the evening that the SEX PISTOLS bassist was released from prison in February 1979. Vicious, who was out on bail after being accused of the murder of girlfriend Nancy Spungen, started taking heroin within hours of his release and was found dead the next morning.

Jerry said: "Sid had just gotten out of jail for murder. He hadn't stood trial, so we don't know the details of whether he actually killed Nancy. He took that secret to the grave. But I'll tell you this: he and Nancy were staying at the Chelsea Hotel, which was full of junkies. And they all knew that Sid had just made five grand for playing Max's Kansas City. Sid and Nancy took that money and bought dope and she got stabbed. That's all we know. It could have been anyone that did it."

He continued: "I had met Sid's mother at the Max's Kansas City show, and I was driving her around town while Sid was in jail, helping her do stuff 'cause she was from England, y'know. We had made him dinner the night he got out and talked about doing great things. He was on and on about all the things he wanted to do. Meanwhile, he was shooting dope all night and overdosed twice while I was there. It's one thing to talk about doing karate and starting a new band, and utilizing your fame for something greater. And it's another thing to talk about it with a needle in your arm while you're turning blue.

"My brother Doyle was 14 years old at the time and had just played the MISFITS' 'Walk Among Us' stuff, so I offered to Sid that we could back him up on guitars. I said, 'Look, you're in the public eye. That 'My Way' is about the coolest thing you've ever done. You could be the biggest thing in the world. We'll back you up.' But he didn't give a shit about himself, about his mom, about facing murder charges. He just sat there and shot dope. He'd got clean being in jail for a month, came out and started shooting almost pure heroin. They got him really killer shit and he couldn't handle it. I said, 'I ain't gonna drag me and my brother into this shit. If you're gonna just kill yourself, fuck this shit.' So we went back to work, driving to Connecticut and delivering machine parts for the family business."

Only added: "The police never questioned me for some reason.

Jerry talked in more detail about his relationship with Sid's mother during a 2011 interviw with Rolling Stone magazine. He said: "Sid's mom and I made him dinner the night he died. We cooked bolognese spaghetti sauce for him. And then I helped her, because I was the only guy with a car. I had to take her to the morgue and to the coroner. I had to take her to all of these places to get her things in order once he was dead. And I actually drove her down and helped her sneak through a fence to put his ashes on Nancy's grave. I guess I was a pallbearer for Sid Vicious for a little while there, and I tried to do the right thing. I didn't know how her parents would accept the fact that his ashes were on her grave, but I felt that they were so much of a Romeo-and-Juliet kind of story that it would be a shame to abide by rules after you're so far down the road."