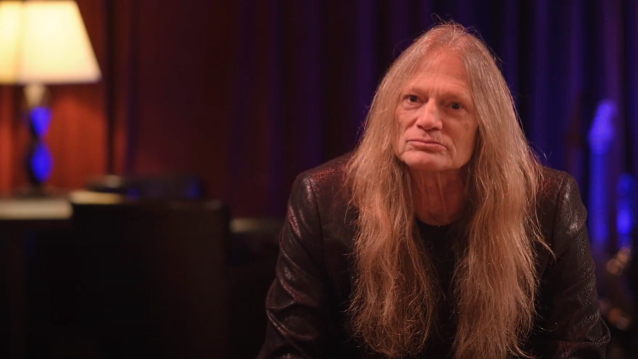 Mitch Perry says that he "hated" having to learn Warren DeMartini's parts while playing with Bobby Blotzer's version of RATT.

Starting in late 2015, Blotzer spent about a year and a half playing shows under the name RATT with a lineup in which he was the sole member from the band's '80s heyday. The drummer's efforts were met with legal challenges by founding singer Stephen Pearcy and other musicians from RATT's classic era — guitarist DeMartini and bassist Juan Croucier — who objected to his use of the RATT name, referring to Blotzer's version as a "cover band."

Perry, who joined Blotzer's RATT in August 2016 and played with the group through March 2017, talked about his time with Blotzer during a brand new interview with "The Classic Metal Show". He said (hear audio below): "When Bobby called me and asked me to do that, he offered me decent money. I knew all the stuff that was going on between all the guys, and I said I would do the gig, but I also kind of kept it at arm's length, because from my mind, even though I was out there playing RATT songs and it was Blotzer, it's not RATT, whatever anyone wants to call it. So, because of all the peripheral bullshit, it wasn't as enjoyable an experience as it could have been. The other guys in the band — Brad and Josh [singer Joshua Alan, who quit Blotzer's RATT in January 2017 and was replaced by Nicols] and Stacey — were all great guys, so on that end, it was fun to play those songs with those guys. But I kind of stayed out of being… I did never post [on social media], 'Hey, I'm playing with RATT here.' I showed up for gigs and played them and went home and tried to stay out of the [drama].

"It was a short period of time and it was fun to play those songs," he continued. "I've gotta tell you, I always loved Warren's playing, [and] once I had to learn his stuff, I hated it — because it was so great. He's a got a really, really incredibly unique way of phrasing.

"There are certain gigs, like when I play with SWEET, I love it, because I don't even have to think twice about what I do with the band. I mean, if I play around with a song, I think the DNA in my playing must be similar to Andy Scott's because everything just seems right and seems natural and it's a piece of cake. When I played RATT, don't get me wrong, I love all those RATT songs, but that's not how I play, so it was a real, real chore to have to learn how to play 'em and make 'em sound good. And that's part of the gig — there are certain gigs you can go in and play and just play your own way and it's fine, but in a gig like that, where Warren is such a great guitar player and such a stylist, you are selling the fans short if you don't at least try to play the solos the same way, 'cause they're pretty iconic."

Pearcy, Croucier and DeMartini played a number of shows in 2017 as RATT, including at Rocklahoma and the M3 Rock Festival. They were joined on stage by former QUIET RIOT guitarist Carlos Cavazo, who played on RATT's last studio album, 2010's "Infestation", and drummer Jimmy DeGrasso, who previously played with Y&T, WHITE LION and MEGADETH, among others.

RATT has spent the last year touring with a lineup that includes Pearcy and Croucier, along with drummer Pete Holmes (BLACK 'N BLUE) and guitarist Jordan Ziff.