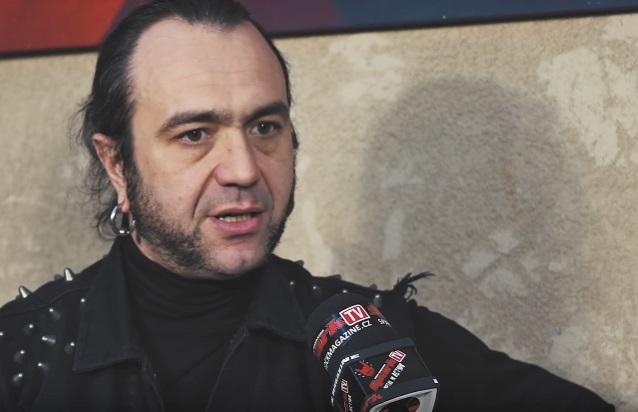 Spark TV, which is part of the Czech monthly magazine Spark, conducted an interview with frontman Fernando Ribeiro of Portuguese metallers MOONSPELL prior to their January 18 concert at Roxy in Prague, Czech Republic (where they played alongside CRADLE OF FILTH). You can watch the entire chat below. A few excerpts follow (transcribed by BLABBERMOUTH.NET).

On how he feels at the start of the band's touring cycle in support of their new "1755" studio album:

Fernando: "I feel very motivated. We have a new album out, we have a new show also to present to people, which we have been playing in our home country, Portugal. We also did a small tour in Spain. So, this is when boys are separated from men. [Laughs] The touring. I think that we are very motivated, we are very well-prepared as well, not nervous."

On MOONSPELL's relationship with CRADLE OF FILTH:

Fernando: "We met CRADLE OF FILTH in the '90s and it's a band that we respect a lot, especially Dani [Filth]. He's been through the thick and thin with CRADLE OF FILTH, but he never gave up on his dream because he loves CRADLE OF FILTH. Sometimes people talk a lot about people like Dani and they forget he's doing this because he loves it. He's a metal fan and he's a black metal fan as well, and, he's a musician. I always relate to people like him. CRADLE OF FILTH, since we met them in the '90s, all members have changed except Dani. That's not news for anyone, but I think they have a very, cool, exciting new lineup with two of your [Czech Republic] countrymates, Martin [Škaroupka, drums] and Ashok [Marek Šmerda, guitar]. I met Ashok when he played with ROOT as well, so I was quite surprised when he joined CRADLE OF FILTH, but he's also a very good guitar player, a very good musician. I think 'Cryptoriana [The Seductiveness Of Decay]' is a very good album."

On whether he was surprised about the positive reaction to "1755":

Fernando: "Actually, we had a very good response. Sometimes things are a bit more cynical, but, obviously, it's not everything like in black and white. People love it and people didn't think it was that special. I think we had the goal as a band, which was to tell the story of [the Lisbon earthquake of] 1755, the story about Portugal. We can never anticipate it will be a story that for some people, it's almost fiction, but it really happened in our country, 262 or 263 years ago. If you asked me, I would definitely have expected it since it was an album in Portuguese, so you never know. I think the people who liked it, in a way, it validated our effort to tell the story, because it's in Portuguese and you're from the Czech Republic, so it's not speaking in English. There could have been more of a linguistic barrier, but people understood that it is a concept album that had to be sung in Portuguese. That was probably the biggest question mark. I think it's still a MOONSPELL album. It's very intense, it's very dramatic. Like I said, it's all oriented to storytelling with the music, so I'm very happy people like it."

On the theatrical element to MOONSPELL's live performances that ties into the concept of "1755":

Fernando: "I hope it doesn't get too cheesy. I think '1755' has a lot to do with theater. That was one of the references I used. Not to make a metal opera or rock opera, I think that's too big for our own shoes, in a way. But, theater in the way of the ancient Greek theater with a choir, with someone warning, with someone going through the ruins with music that identifies the natural elements, but also the elements from the streets, so, I think it's definitely more theatrical. I don't really know what it means; it's just something we do. We talked about it as a band, even the wardrobe was open, everything, I said it only makes sense to play this live, even intertwining with older songs. We play more from '1755' from any other album on this tour. But, it's a show that we designed in our heads to grab people in the story. Yeah, it's a metal show, they can headbang, they can mosh, but I hope they don't invent anything for the earthquake like they did for the Vikings. You'll see thousands of people or hundreds of people and it's a sight I still have to get used to [referring to the 'Viking rowing' that sometimes takes place during AMON AMARTH concerts]. Yeah, but to grab people into something more dramatic or theatrical, it's exactly what we tried to put in the '1755' tour."

MOONSPELL will join AMORPHIS, DARK TRANQUILLITY and OMNIUM GATHERUM for a North American trek that kicks off September 7 in New York City.