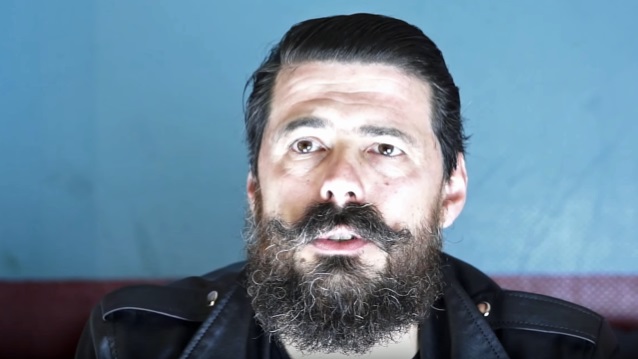 MOONSPELL Guitarist: 'I Don't Know For How Long We're Gonna Keep On Doing This'

LoudTV.net recently conducted an interview with guitarist Ricardo Amorim of Portuguese metallers MOONSPELL. You can now watch the chat below.

Asked what the future holds for MOONSPELL, Ricardo responded: "To keep on working, I believe. I don't know for how long we're gonna keep on doing this. As long as we feel good, we'll do this; otherwise, we'll have to think of some other options, I don't know. But we've been around 25 years, [and] I think it's time to think about the future, but not something that we're gonna do right now, like, 'We have to do this.' Just think about that one day this will eventually come to an end — unless I'm Keith Richards and I wanna die on stage."

Amorim admitted that he "sometimes" ponders life after MOONSPELL. "I'm 44, so it's natural that I start to think that eventually… Time runs so fast, and in no time I'll be 64, [and] I don't know if I'm still up for it or not [at that age] — me and the guys," he said. "But it's not something that is taking our sleep, to be honest. I guess everybody for now wants it to continue. What I say is that it's natural that every one of us starts to think, like, 'I'll be in my 60s sooner than I think,' so we have to think about whatever, what comes next."

MOONSPELL's latest album, "1755", was released in November via Napalm Records. The Portuguese-language disc was written about the 1755 Lisbon earthquake, also known as the Great Lisbon earthquake, which occurred in the Kingdom of Portugal. In combination with subsequent fires and a tsunami, the earthquake almost totally destroyed Lisbon and adjoining areas.