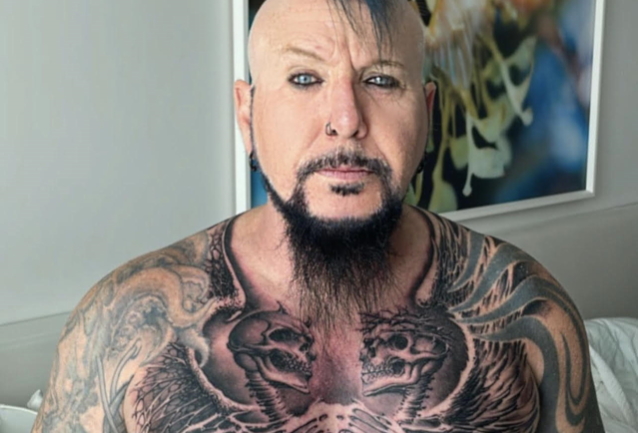 The 50-year-old musician had the chest piece done over the course of three days by tattoo artist Tony Kelly, who works at Cypress Ink Studios in Port Charlotte, Florida.

On Monday (May 23),Gray took to his Instagram to post pictures of the final result, and he included the following message: "What a whirlwind last few days it's been for me/Tony and this thing! Day 1: conceptualize and draw on skin. Then line the whole piece. Day 2: start and finish Angel side 5.5 hours. Day 3: Start and finish demon side another 5.5 hours add a little here and there and boom ! DONE! My skin feels like hamburger that has a sunburn but kidz…

"I couldn't be more proud to wear this amazing piece! The pain was more than worth it! My long time friend (23 years!!!) @tonykellytattoos ripped this piece up for me! He also did my alien (upper right arm) 22 years ago.

"We've been talking about this chest piece for over 2 years and FINALLY! We made it happen!!! I'm so proud of this piece and him! You've come so far brother. It's an honor to be tattooed by such an amazing artist. We had great talks about life, passion for art we have and 'the process' and how paramount it truly is.

"I love meeting, knowing and conversing with artists (of any medium) that embrace the power of the process no matter how easy or difficult it is to achieve. Sometimes the nurturing And the creation of the product outweighs the result. But not in this case. This is truly incredible. When it was done I looked in the mirror and said 'that is the coolest tattoo I've ever seen and it's on me! Yesssss! I'm sure many of you out there feel the same about your own pieces too. Feels good don't it!

"Anyway just wanted to stop by, show this off and give my boy TK my mad props! Thank you brother can't wait for round 2!

"Until i see you all from a stage screaming in your faces! Stay Awesome!"

Gray has spent the past 16 years fronting HELLYEAH, which released its sixth studio album, "Welcome Home", in September 2019 via Eleven Seven Music. The disc marked the group's final effort with drummer Vinnie Paul Abbott, who passed away nearly four years ago.