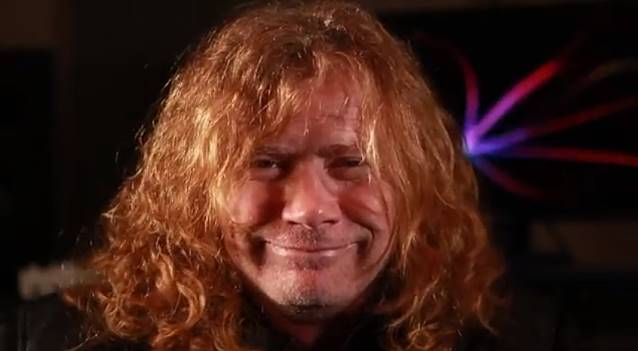 MUSTAINE: A MEGADETH Album Is Not Something You Can Listen To And Get Everything In One Listen

MEGADETH mainman Dave Mustaine was interviewed on the January 10-12 edition of Full Metal Jackie's nationally syndicated radio show. You can now listen to the chat using the Podbean widget below. A couple of excerpts from the interview follow.

Full Metal Jackie: Dave, how have you most matured most as a person? What correlation can you make between personal maturity and continued growth as a musician?

Mustaine: Well, I think when you're young and you don't have anything to really live for, you kind of live your life a lot more reckless. And as you start to grow up and — 'cause, remember, I was a street kid — and then when you find somebody and you fall in love… Not everybody that's listening right now has had that luxury; we've fallen in lust, but not necessarily in love. When you do that, and you find that person that's your soulmate, all of a sudden there's two people, and you have to work a little bit harder to keep your act together, and you need to work a little bit harder to bring home the bacon to take care of things. And then when you have a couple of [children], you know… I mean, I've got two, and a lot of people said it was gonna make me a wimp and that parenthood would change the sound of the band. It didn't. The industry changed the sound of the band. People don't remember what was popular back in 1992 when we did "Countdown To Extinction". It was BUSH and NIRVANA and SPONGE and stuff like that. And it's, like, what choices do you have?

Full Metal Jackie: Dave, there's ALTITUDES & ATTITUDE, Dave Ellefson [MEGADETH bassist] and Frank Bello's [ANTHRAX bassist] new band with Jeff from A PERFECT CIRCLE. What's the healthiest thing about stepping outside the context of MEGADETH and how does that ultimately best benefit MEGADETH?

Mustaine: Well, I don't know anything about this, so it's not really any of my business. Whenever I do anything, it's always MEGADETH-centric. The symphony thing [I am] doing [with the San Diego Symphony in April], we're closing with a MEGADETH track. So I know where home is for me. I think that in the past we've had other alumni that have wanted to do other things, and I don't care if you do other stuff, but I think the fans kind of do. They wonder often, "Is everything OK?" Everything's OK with me. I haven't heard it. I don't know if it's any good or not, I'm sure it's good. Frankie and Junior are good musicians. But it reminds me of that joke when you're in the jungle and the drums stop, it's very bad. And when they ask the guy why [the drums have stopped], [he replies that] it's a bass solo. So… I don't know, man. [laughs]

Full Metal Jackie: It's funny you mention that, about musicians in bands doing other bands. I have found myself in the past when I was a fan of a band, and I hate to even say this, and a member of the band decided to go do a solo record, while I can appreciate somebody wanting to explore a certain creativity or whatever, I was always like, "Well, I hope it doesn't do that well, 'cause I love my favorite band."

Mustaine: We grow up with these bands that we love. Like when I discovered AC/DC, I thought it was great until everybody else started listening to it. I was, like, this is no longer my little indie band from Australia. Granted, they're Scottish, but… You know, funny stuff like that. And as bands became popular, a lot of times the reason that the public turns on them, it's because the bands turn on the public. They forget who pays the bills. When I got my Aston Martin, I said "thank you" to all of our fans. Granted, not everybody has one of those, but I remember who bought that car for me. And I'll never forget that. I think when you do grow up being homeless and having to live in a car and be on food stamps and welfare and stuff, you have a choice: you can either continue sucking on [expletive] or you can make a difference, if you're capable of working. If you're not capable of working and you need that assistance, then it's there. But that's the proper use of it. So I know that a lot of things that we have right now… [Like] this bus, the way that we travel right now. Some bands, they don't get to travel by bus. They travel by motorhome [laughs], or like we did in the beginning. [laughs] Oh my God! Talk about the Griswolds.

Full Metal Jackie: MEGADETH's latest album, "Super Collider", made a lot of year-end best-of lists for the end of 2013. Is a best-of mention a better compliment than favorable reviews, 'cause it means that someone is still listening to, and liking, the album?

Mustaine: Well, I think that with MEGADETH's music, you've gotta remember the music industry right now has a lot of new writers that are in there and they don't know the history of the band. So they listen to MEGADETH and they think it's, like, "These guys are older and I listened to the record and I don't get it." [A] MEGADETH [album] is not a record you can listen to and get everything in one listen. There's a lot of moving parts. The lyrics are pretty provocative and pretty thought out; you can't just read through the lyrics and understand all the double entendres and all the hidden meanings. I consider myself, being a New York Times best-selling author, to have a pretty good grasp of The King's English, and I try and use that. I mean, I think, over my whole career, with almost 200 songs, I've said "baby" in three songs maybe. And I don't think there's very many records out you can get through without hearing one song that doesn't have it. So I think that looking back at everything that we've done, it's all a cumulative effort with "Super Collider", but that was also a turning point for us, going back to a major label. And the love that we feel for Universal and their staff, everybody with our agency and all the people involved with us right now, we figured we're just gonna go back to what we do best and not try and write songs for radio. Because it's like trying to have a baby: it either happens, or it doesn't. It's fun to try, but a lot of people fail when they do that. And for us, when we try to make songs, a lot of times they're good, but "Symphony Of Destruction" came out of nowhere, and so did "Peace Sells". And those are the songs that everyone says, "Well, write another 'Peace Sells'," or "Write another 'Symphony'."' You can't just write that stuff [whenever you want]; it's inside of you and it has to come out when it's ready.