Stockholm, Sweden-based death metallers NECROPHOBIC will play their first show with new bassist Alex Friberg on December 26 at Mosebacke in the band's hometown.

NECROPHOBIC is currently working on its sixth full-length studio album, tentatively due in early 2009. Songtitles set to appear on the as-yet-untitled CD include "For Those Who Stayed Satanic", "Triumph Of The Horned", "Wings Of Death", "The Tower" and "Revelation 666".

NECROPHOBIC released a limited "metal box" called "Satanic Blasphemies" in September via Regain Records. The set includes a CD, a poster, a patch and a extensive booklet. The CD features material from the band's first two demos (1990's "Slow Asphyxiation" and 1991's "Unholy Prophecies") plus "The Call" 7" EP from 1992. The material comes fully remastered.

NECROPHOBIC's video for the song "Blinded By Light, Enlightened By Darkness", taken from "Hrimthursum", can be viewed below. 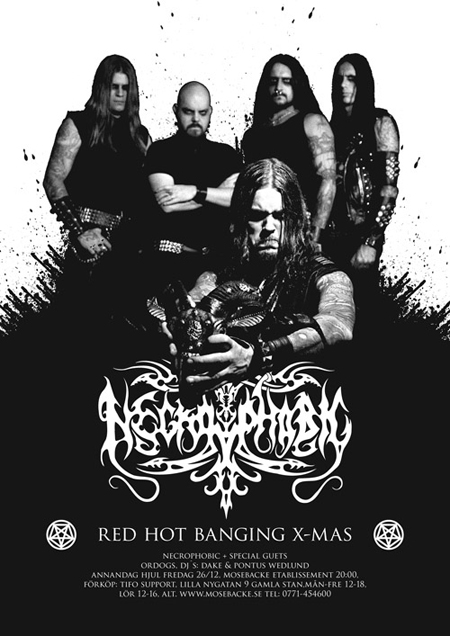