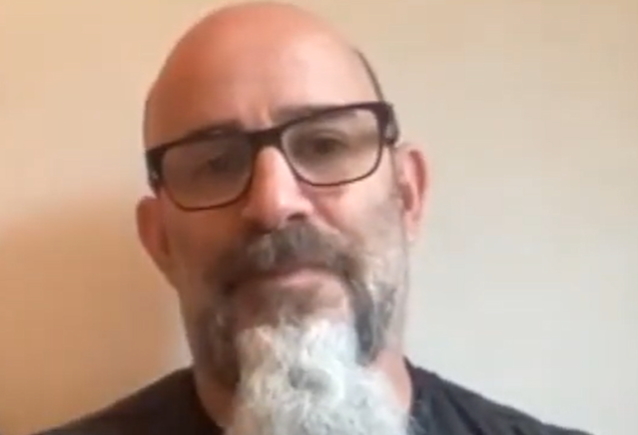 ANTHRAX guitarist Scott Ian spoke to Kyle Meredith about the band's plans for the coming months. He said (as transcribed by BLABBERMOUTH.NET): "We didn't get to tour [for our actual 40th anniversary in 2021], so we're doing the 40th-anniversary tour in our 41st year. [Laughs] Obviously, we couldn't go out last year and do it when we wanted to, so we've got this summer run coming up with BLACK LABEL [SOCIETY] and HATEBREED. And we're calling that part of our 40th anniversary. We've got 40th-anniversary dates in Europe after that, in the fall. And who knows? I like to think this U.S. run with BLACK LABEL is gonna do pretty well, and maybe we get to do a second run of those dates at some point early next year. And then I'm sure next year at some point there should be a [new ANTHRAX] record, depending on when we get in the studio.

"So, yeah, it's all starting to ramp up again," he continued. "Fingers crossed it all doesn't get thrown in the garbage. But I'm being very optimistic that things are moving forward and everyone can go back to work — meaning we get to go play shows again. And I'm very excited about that."

Last month, Scott told Metal Injection about the progress of the writing sessions for the follow-up to 2016's "For All Kings" album: "We have songs, and all I can say is we will get in the studio when we're ready, which I hope is this year. I would love that. I think we're getting there. I think we have great songs. I think people will be very happy.

"Not to make a weird comparison, but it's our third record back together with [singer] Joey [Belladonna]. Actually, it's an odd comparison. I should just say it's our third album since our kind of our reboot in 2010 and our third album back in the day was 'Among The Living'. I'm not saying that this is [like that album], because it's not 'Among The Living II' in any sense, but I just think we have some great songs and there's like a fucking mountain of great riffs. I think people are going to be very happy."

Ian previously discussed ANTHRAX's upcoming LP during a July 2021 appearance on Full Metal Jackie's nationally syndicated radio show. At the time, he said: "We've been at it for a little while now. We actually started writing in '19 — pre-COVID — and kind of stepped away from things when COVID happened. We were all separate and apart and we would kind of revisit some of the demos, but we weren't actively working on it.

As previously reported, ANTHRAX and BLACK LABEL SOCIETY will team up for a 24-date North American tour this summer. The five-week trek will kick off on Tuesday, July 26 at Van Buren in Phoenix, Arizona and wrap on Sunday, August 28 at the Fillmore in Philadelphia, Pennsylvania. Both bands will play headline sets. HATEBREED, celebrating the 20th anniversary of the "Perseverance" album, will be the special guest.