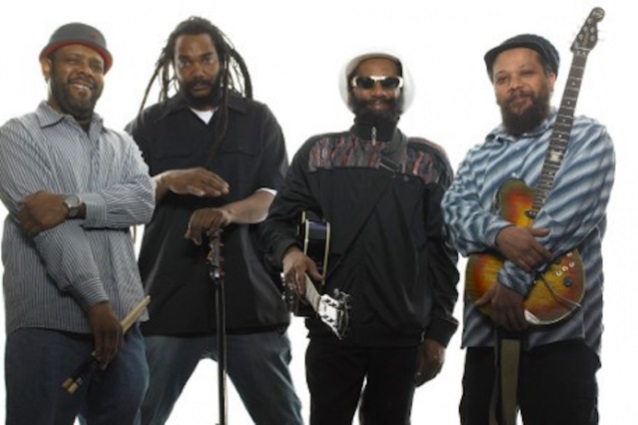 In a brand-new feature by music writer Joel Gausten, legendary BAD BRAINS frontman H.R. (a.k.a. Joseph I) discusses his reaction to the recent book and documentary on his life (both titled "Finding Joseph I") and confirms that the BAD BRAINS are currently recording a follow-up to their 2012 album "Into The Future". An except from the story appears below.

Although H.R.'s place in history was solidified the very first time he hit the stage with the BAD BRAINS in the '70s, he has experienced a career renaissance in recent years complete with the public acclaim he has so richly deserved. In addition to their 2006 return as a recording and touring unit (resulting in 2007's "Build A Nation" and 2012's "Into The Future"),the original BAD BRAINS — H.R., Earl, guitarist Dr. Know and bassist Darryl Jenifer — were prominently featured in the 2006 film "American Hardcore" and later became the subject of their own full-length documentary, 2012's "Bad Brains: A Band In D.C." In 2016, H.R. was the subject of the documentary "Finding Joseph I" and an oral history book of the same name.

"Overall, the book and the film were great," H.R. said. "They had a lot to do with what people thought about me. I was so surprised to know that that many people had cared about me, really loved me and wanted to work with me! I was surprised at that, and what they had to say was just overwhelmingly cool. I want to thank them very much for their inspiration and for their support."

As celebratory as the "Finding Joseph I" releases are, both also offer an unflinching view inside H.R.'s turbulent mental state. Tales of violent outbursts, burnt bridges and bouts of homelessness flow between words of praise from fans and musicians alike, painting a complex portrait of a man who is both immensely talented and deeply troubled.

Unsurprisingly, the fallout from his unpredictable behavior has had a chilling effect on the BAD BRAINS' career. In one pivotal scene in "A Band In D.C.", a frustrated Jenifer unloads on H.R. backstage in Chicago after the singer delivered a near-catatonic performance (punctuated by snarky comments) in front of an agitated crowd.

Fortunately, things are finally turning around. The "Finding Joseph I" book and film both end with H.R. finally welcoming professional help for his schizophrenia, a process helped along by the love and support of his wife/manager Lori. Shortly before "Finding Joseph I"'s initial November 2016 theatrical release, the BAD BRAINS became the first hardcore band in history to be nominated for induction into the Rock And Roll Hall Of Fame. After decades of inner strife, H.R. is finally enjoying a life worthy of his many gifts.

Naturally, one very big question remains: What does the future look like for the BAD BRAINS?

"The future looks bright!" replies H.R. "We got a great new manager. We just came from doing a little tour over the summer, and we're just waiting for the weather to break and we'll be on our way to do more festival work."

Now a five-piece band following the recent addition of full-time second guitarist Chogyi Lama ("Man, can that dude throw down!" says H.R.),the BAD BRAINS have new music on the way — 35 years after their legendary self-titled cassette changed everything.

"Any day now, we're scheduled to go into the studio and do some more work on a new album. The greatest album that we did, 'Into The Future', came off great, and I really like working with the fellas."

If there's ever a time for new BAD BRAINS music, it's now. With America in a state of political, financial and spiritual disarray, the Positive Mental Attitude (PMA) expounded by the band is in high demand. While the realities of modern life are difficult for many, H.R. insists that there is still plenty of hope to be found on stages and records around the world.

"I think that people overall need to listen to more good music!" he laughed. "What they need to do is put down the sword and learn to be forgiving towards each other, just give a chance to let peace rule over their bad, negative feelings and be more positive with listening to good music and being supportive of the good scene that's happening."

The complete feature is available at www.joelgausten.com.