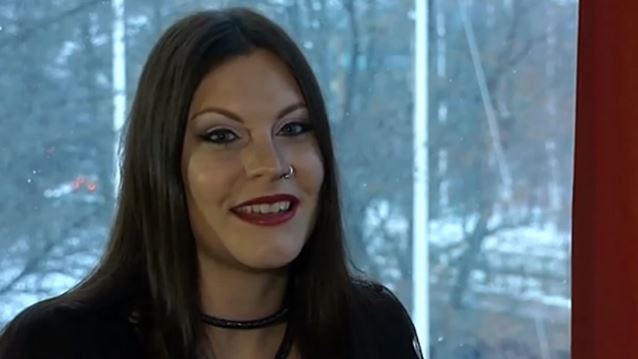 Finnish / Dutch / British symphonic metallers NIGHTWISH will release their new album, "Endless Forms Most Beautiful", on March 27 in Europe and March 31 in the U.S. via Nuclear Blast.

NIGHTWISH's Dutch singer Floor Jansen, who officially joined the band last year, recently moved to Finland in order to learn the language and facilitate communication and effective interpersonal relationships among the bandmembers.

Speaking to Finland's national public service broadcasting company YLE earlier this month, Floor said (see video below): "I really can't wait [for the new album to be released and for the subsequent tour to begin]. Because we've been working towards these moments for so long now — Tuomas [Holopainen, keyboards] and Marco [Hietala, bass/vocals] even longer, of course, than I am. But, you know, for all these months, it's like a painting or a sculpture that you add things to. Bit by bit, you come to an end result, and that's there now. So we already know how it's gonna look like and sound like. And that is an exciting thing just on its own, but then you really wanna start sharing it already, so we have to be a bit patient with that. And I love playing live so much that I really, really miss it when I can't. So I'm super ready to get out on the road."

Jansen also spoke in more detail about the recording process for "Endless Forms Most Beautiful", explaining: "We took a long time to rehearse [before entering the studio]. So the demos [of the new songs] were sent to us [by Tuomas and Marco], and then we started rehearsing as a band together, just jamming the stuff. And that was super nice, to let everything grow on everybody."

She continued: "For me, just to make the puzzle, vocally. Like, okay, there's a vocal melody, and there are lyrics, but how will I play with this? What kind of vocal style do we think would fit? And what dynamics, what kind of sound would fit? It's nice to be able to work on that and let everything kind of sink in, because it always needs to grow on you, and it's nice if you can take that time before you start recording it. 'Cause… I don't know… I guess every musician will know this feeling… You wish you could record the album after your tour. Because then you've already been doing the songs live a hundred times or more, and you get into the songs to the level that you can't have, even when you wrote it yourself, when you record it. So, again, this long rehearsal period really added to the feeling of getting the songs into ourselves before we can transmit it onto a record."

The cover artwork for "Endless Forms Most Beautiful" was created by the band's longtime collaborator Toxic Angel.

Commented Holopainen: "This classic quote is where it all began. We set sail for the ultimate journey in March 2015. Join us!"

A single called "Élan" will precede the full-length CD on February 13. The four-track single features the album version of the title cut, a radio edit and an alternate version of "Élan", as well as the non-album bonus track "Sagan".

Regarding "Élan", Holopainen said: "'Oh, while I live to be the ruler of life, not a slave. To meet life as a powerful conqueror, and nothing exterior to me will ever take command of me.' This beautiful quote from my hero Uncle Walt [Walt Whitman] was the starting point for writing 'Élan'.

"It's important to surrender yourself to the occasional 'free fall' and not to fear the path less travelled by.

Pre-order your copy of "Élan"here.

As previously reported, longtime NIGHTWISH drummer Jukka Nevalainen sat out the recording sessions for the group's new CD due to health issues; Kai Hahto (WINTERSUN, SWALLOW THE SUN, TREES OF ETERNITY) has replaced him.

NIGHTWISH recently revealed the famed evolutionary biologist and atheist writer/leader Richard Dawkins will appear as a guest on the band's eighth studio album.