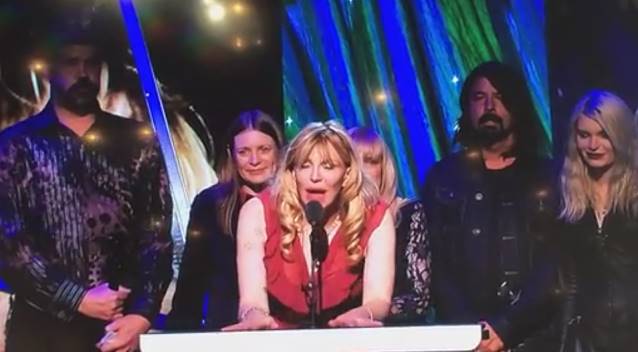 The surviving members of NIRVANA — Dave Grohl, Krist Novoselic and Pat Smear — performed a four-song set at tonight's (Thursday, April 10) Rock And Roll Hall Of Fame induction that saw them joined by an impressive lineup of some of rock music's most iconic female artists, specifically St. Vincent (whose real name is Annie Clark),Lorde, SONIC YOUTH's Kim Gordon, and Joan Jett.

Jett kicked things off by singing lead and playing guitar on "Smells Like Teen Spirit". She was followed by Gordon, who fronted "Aneurysm". Then came Clark on "Lithium". And finally, Lorde joined the band for a rendition of "All Apologies".

Dave Grohl and Jett have some history together, with Grohl and his FOO FIGHTERS bandmates performing with her on a segment of "Late Show With David Letterman" a while back.

Accepting at the induction ceremony was Cobain's widow, Courtney Love, who has a longstanding feud with Grohl and Novoselic over the use of NIRVANA's music. Love's speech included her embracing Grohl and Novoselic. "This is my family I'm looking at right now," she said, leaving the podium to hug "Brother Krist" and Grohl. "I just wish Kurt could have been here. Tonight he would have really appreciated it."

2013 marked the first appearance of NIRVANA on the Rock Hall ballot. NIRVANA was the only act last year to land on the ballot in its first year of eligibility.