Florida-based death metallers OBITUARY have completed work on their new album for a tentative May/June release via Candlelight Records. Vocalist John Tardy states, "It came out really sick and I cannot wait for you guys to hear it... it is heavy!!"

Check out the album artwork below. The band once again worked with artist Andreas Marschall, who previously created the art for "The End Complete", "Frozen in Time", and the group's last record, "Xecutioner's Return".

Guitarist Ralph Santolla previously said about the new material, "The new stuff is HEAVY, some of my favorite OBI riffs yet. Trevor's [Peres] guitar sounds huge and menacing. If you like OBITUARY, you're gonna love this record."

"Xecutioner's Return" was released in the summer of 2007 via Candlelight Records. The CD was mixed at RedRoom Recorders and was mastered at Morrisound Studios in Tampa. 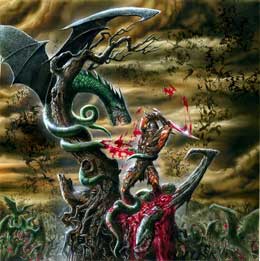