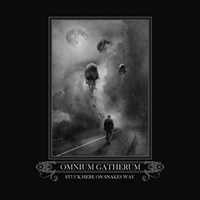 A listening party for OMNIUM GATHERUM's new album, "Stuck Here on Snakes Way", will be held in band's hometown of Kotka at the Yellowstone club during the "Yelloween Metal Party Weekend". The CD will be played in its entirety on Friday, March 23 at 21.30 and Saturday, March 24 at 21.30.

The cover artwork for "Stuck Here on Snakes Way" has been posted online at this location. Due on April 2 via Candlelight Records (one day later in North America),the CD was recorded during November-December 2006 at Southeast Studios in Karhula, Finland with producer Teemu Aalto. An eight-minute video clip documenting the recording sessions for the album has been posted online at YouTube.com.

The song "Into Sea" has been posted online on the band's MySpace page. Also available at the same location is a clip of the track "Spiritual".

"Stuck Here on Snakes Way" marks the band's first release with brand new vocalist Jukka Pelkonen, who joined the group in May 2006.