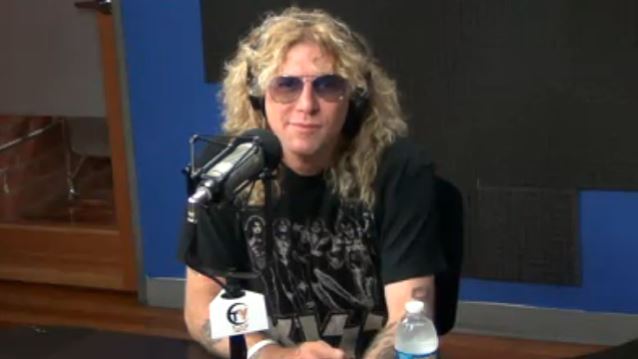 The latest episode of the "Inside Metal" TV show on TradioV features an interview with former GUNS N' ROSES drummer Steven Adler. You can now watch it below.

Speaking about GUNS N' ROSES' classic debut album, 1987's "Appetite For Destruction", Adler said: "I have a new outlook on recording that record. I practice it all the time. I have new house [with] a studio, so I have a P.A. and I can play [along] to songs. And I play the 'Appetite' stuff. And I realize that ['Appetite For Destruction' producer] Mike Clink, who is a wonderful guy — I'm not putting him down — but I really feel that he just wanted to get that record over with, and he didn't think… he didn't believe it was gonna be… This is how I feel; I don't know what he was thinking. But when I listen to it now and play to it, I go, he didn't really care… I don't think he thought the record was gonna be big or do anything. He wanted to just get it over with and get on. But now that I have a better understanding of timing and recording… 'Cause that, like, the first time we went into a real studio and recorded. Actually, we did 'Live ?!*@ Like a Suicide' [EP in 1986] at Spencer Proffer's [studio], but that was like making a demo tape; we just played and that was it. But we did the same thing with 'Appetite'; it literally took six days. And nobody goes in the studio and does it just for six days. I mean, like, 'Sweet Child O' Mine', that was played one time — once! You're supposed to go in a studio and, when you come out of the recording studio, you're supposed to be a better player… There's no timing. Not that I wanted it to be like a metronome, like all those other '80s records."

Adler also talked about his 2010 autobiography, "My Appetite For Destruction: Sex, And Drugs, And Guns N' Roses", in which he told all, fearlessly addressing his struggles with heroin and crack addiction; his financial ruin after being kicked out of GN'R; his shattered marriage; and the severe health problems that nearly claimed his life on several occasions.

"It was such a great release to get all those things and emotions out," he said. "It really helped me to move on with my life. That's one thing I did learn in AA. Just being able to get your feelings out is very therapeutic. And plus there's thing that happened when we were younger; we think we're the only ones [that went through it]. I was talking about the sexual-abuse thing; I was thirteen years old. Obviously, that bothered me my whole life. Once I worked with Dr. Drew and I talked about it with people that understood and weren't gonna judge me… Which, nobody judges you anyway, but you think [they will]. I was able to get off the heroin and the crack, working with Dr. Drew. And then I still resentments toward my old band. And once I was able to work through that…"

He continued: "I live by four agreements: be impeccable with my word; don't take things personally; and always do my best — no more, no less. And it's helped me so much to be able to move on with my life. Now I'm not worried about getting high or drinking, because I just don't want to. I'm having too much fun and feel too good not drinking. It's so funny… I would drink because I was depressed. Well, I was depressed because I was drinking. Because, I mean, alcohol is a depressor. It works at first when you're young; it makes you be able to talk to girls, be comfortable around other teenagers. But teenagers are idiots. Who gives a crap what they think? But that's how alcohol fools you."