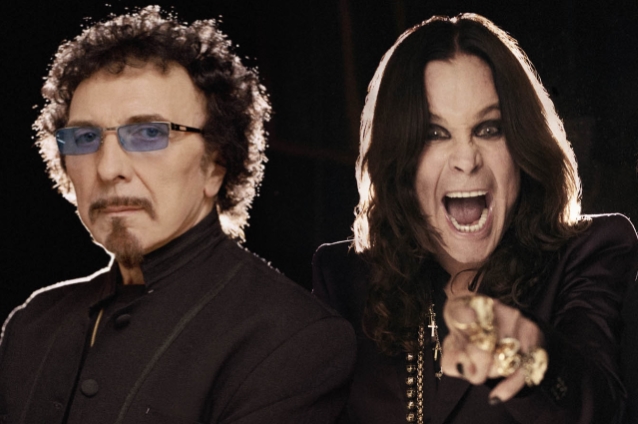 OZZY OSBOURNE On TONY IOMMI: 'Do I Like Working With Him? Not Really.'

Ozzy Osbourne says that he doesn't particularly enjoy collaborating with Tony Iommi even though he appreciates the BLACK SABBATH guitarist on a personal level. "Do I like working with him? Not really. Do I like him as a person? Yeah, I love him as a person," Osbourne told The Times in a new intervew. "But if people was to say to me, 'Was there a leader of BLACK SABBATH?' I'd have to say it was Tony Iommi, because without his guitar riffs, we'd be still sitting in fucking rehearsal with our thumbs up our arses going, 'What do we do now?'"

Osbourne also claimed that he has "moved on" from the band, and compared his relationship to the rest of SABBATH on their recent tour to reconnecting with a former girlfriend after several decades.

"I'll tell you what it was like. It's like when you're younger and you met a girl, Susie, and you break up and you don't see her for 30 years," he said. "Then she's in town and you go, 'Oh, I'll give Susie a call,' because your memory only remembers the good parts and you can narrow it then to a week and you go, 'I remember that week and it was lovely.' But then you go back and you go, 'I forgot the fucking four and three-quarter years I was fucking miserable.'"

Osbourne, who is currently on the road on his own farewell tour as a solo artist, described his current trek as "great fun." He explained: "I'm in control and it's so much better. I get more pleasure out of doing the gigs now."

Ozzy has said in some of his recent interviews that his last tour with BLACK SABBATH — the band's farewell trek which ended in February 2017 — was not a pleasant experience for him. "It's not allowed to have fucking fun with SABBATH," he told Rolling Stone. "It's too serious. Tony was trying to have a go at me, saying, 'Don't fucking talk over my solos.' I go, 'Okay, are you sure? 'Cause most of the fucking song is solos. The intro to the song is fuckin' five minutes and then I sing for about two seconds and then it's another one.' With my own thing, I'm looking to have fun, and that's what music's about for me. I'm not a serious fucking singer. I'm just a frontman who's trying to get the crowd going in front."

This past September, Ozzy told Philadelphia Inquirer that he "didn't have a great time" on SABBATH's final tour. He explained: "I spent nine or 10 years in SABBATH, but I'd been away from them for over 30 years. With them, I'm just a singer. With me, I get to do what I want to do. I was getting bad vibes from them for being Ozzy. I don't know — what the fuck else can I be?"

Last month, Ozzy postponed the final four shows on his North American "No More Tours 2" after undergoing surgery for multiple infections in his right hand.