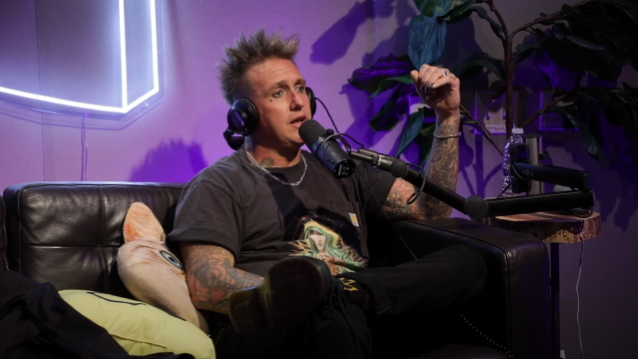 PAPA ROACH's JACOBY SHADDIX On Staying Sober: 'I'd Rather Put A Gun In My Mouth Than Put A Drink In My Mouth'

PAPA ROACH's Jacoby Shaddix was a guest on a recent episode of "Emo Nite Radio". During the chat with host Morgan Freed, the singer, who has been sober for ten years now, spoke about how he found himself taking to the rock and roll lifestyle a little too easily, which almost cost him his family.

"It wasn't till I went on tour for [PAPA ROACH's 2000 album] 'Infest' that I believe the alcoholism, the alcoholic lifestyle, it really took over," he said (as transcribed by BLABBERMOUTH.NET). "That's when it just [went] full-tilt boogie… We wanted to rage, man. We all just wanted to rage, and we had people that co-signed it. I thought I was in the '80s for a couple of years. I was, like, 'Let's go, dude.'"

Asked if he misses any aspect of his drinking days, Jacoby said: "I had a lot of great times then and a lot of not-so-great times. It was like the highest highs, the lowest matched. And I think that the volatility within that was what really fucked me up. I was not a good guy. I had a good reputation, and I was nice to people; that was true. I wasn't good to myself. I wasn't good to my wife. [I wasn't good to] the people that were closest to me. The strangers, I'm, like, 'What's up, bro? Good to see you.' And then I put my head through doors and destroyed hotels. I done destroyed a bunch of hotels on that cycle, man. Some of 'em were fine and then some of 'em was, like, just sad."

Pressed about whether it gets easier or harder for him to stay sober as time goes on, Jacoby said: "[It's] way easier. It's not an option for me anymore. Not to sound macabre or dark, but I'd rather put a gun in my mouth than put a drink in my mouth. 'Cause I know the drink is a slow way to a miserable, lonely, isolated death. It's not for me. I've got way too much great stuff in my life to live for. There's so much in this world that is inspiring, that is lovely, that just fills me. And, yeah, it's music; it's [staying] creative; it's friendships; it's my spirituality; it's my family; it's my children; it's my band; it's my connection with my band. And even at times I wanna just, 'Aaaargh, my band drive me crazy. Aaaargh.' When something's wrong with me, I've gotta figure that out."

A year and a half ago, Shaddix revealed during an appearance on an episode of the "Hardcore Humanism With Dr. Mike" podcast that he had a slip-up on his path to sobriety. "Just to be straight with you, during the pandemic, I fell off the wagon and I was smoking pot," the singer said. "And I just got caught up and depressed and just stuck in this space. And I wasn't working an active program of recovery, and I found myself with a joint in my mouth, you know? And yeah, it's legal in California, and yes, it is medicine to some people, but it's not to me. Anytime I put any kind of mind-altering substance in my body, there's this veil that gets dropped on me and just kind of isolates me from the world, isolates me from the potential of who I can become and puts me in a space of inaction. And that's not a good place for me to be.

"So I got honest with my brothers in recovery," he continued. "I was, like, 'Hey, man, this what I've been up to. I need help, dude. I need help getting myself back out of this.' Because I knew I was getting closer. I told my guys, 'Well, at least I didn't drink.' And they were, like, 'Well, yeah, that's good. That is good, Cobe. But you were headed straight towards it, homey. That's where you were going.' And that was a really hard realization but a good realization for me to have, is to really understand I was feeding the bad wolf. I was just doing the wrong things."

In a 2019 interview with Kerrang! magazine, Shaddix revealed that the struggle with alcohol had been in his family for generations, continually destroying lives and relationships.

"I remember my mom telling me when I was a kid that I had to be careful, as alcoholism runs deep in both sides of the family," he said. "I should have heeded the warnings, but when you're young and restless, you don't give a fuck, so I went for it. And lo and behold, it started damaging relationships, and my health and drive. I tried for a long time to put the bottle down. I got kicked out of the house and it looked like my wife and I were going to split up. There came a point when I realized enough was enough, and now I haven't picked up the bottle in seven years. It's dramatically affected my life in so many positive ways, giving me the opportunity to be a good husband and father, as well as a kickass frontman. I watch all the fucking VH1 documentaries about musicians dying, and having friends die from this shit, I'm lucky that I got out alive. I can't say I've been perfect — I've slipped up and smoked weed a few times, but haven't had any alcohol, cocaine, pills or anything else."

When asked if he ever feared that the need to stay sober might have meant he had to stop touring, Jacoby said: "I think that's why I kept falling off the wagon. Before we put out 'Getting Away With Murder' [2004], that was the first time I tried to put the bottle down. But on the road, I was apart from my sober friends, and I'd be on the bus with everyone drinking. So I'd end up in the back lounge, secretly chugging vodka. That was tough for years. Now I've been relieved of the obsession — I look back like, 'That's a young man's game.' Plus, I want to stay pretty."