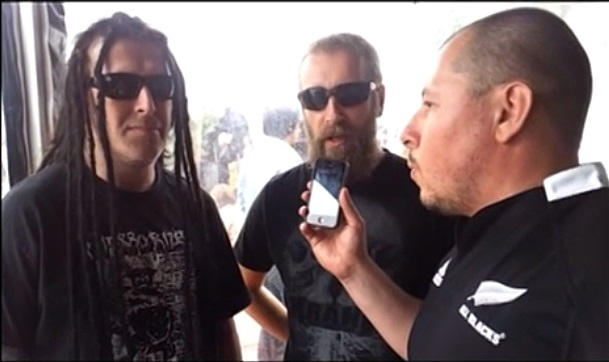 On the progress of the songwriting sessions for the follow-up to 2012's "Tragic Idol":

Nick: "We're about three quarters of the way through an album. We're getting there. The ball's rolling. And we've got another maybe four songs or so to go. So far, it's sounding pretty good."

On whether the band is planning to perform any of the new songs live before the next album is released:

Nick: "No, because when you play it live, you release it. So we don't wanna release it until we really have to. And it doesn't matter how good or bad it sounds, you basically are releasing it. So it's a case of wanting to hold back as long as we can."

On PARADISE LOST's upcoming performance with an orchestra on September 20 at the Roman theatre in Plovdiv, Bulgaria:

Nick: "We thought it would be a good idea to play in Bulgaria with a real orchestra. It's something we've sort of thought about, but it's kind of quite hard to make it happen. I mean, a lot of our songs lend themselves very well to classical arrangements, so it's nice to have the oppottunity to give that a go. Yeah, it should be interesting."

For PARADISE LOST's one-off performance in Plovdiv, the band will be joined by the renowned Plovdiv Philharmonic Orchestra founded nearly 70 years ago and made up of over 100 highly qualified musicians. The orchestra has its roots in the hundred year old orchestral tradition in Plovdiv and over the years has launched the careers of many world-famous conductors.