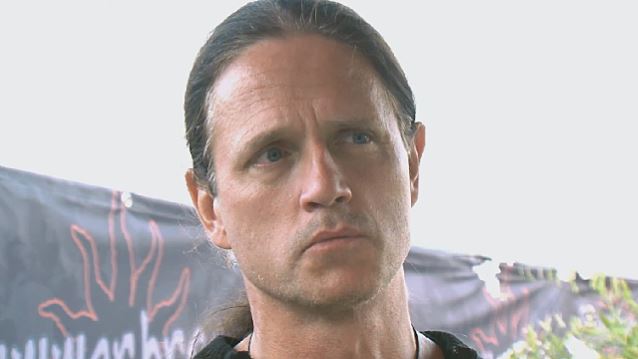 Germany's EMP Rock Invasion recently conducted an interview with guitarist Patrik Jensen and vocalist Marco Aro of Swedish metallers THE HAUNTED. You can now watch the chat below. A couple of excerpts follow (transcribed by BLABBERMOUTH.NET).

On the 2012 lineup changes that resulted in the exit of three members, Peter Dolving (vocals),Anders Björler (guitar) and Per Möller Jensen (drums):

Jensen: "We lost three members back in 2012 due to many reasons. But Peter left the band first. We tried to find a new singer with the four remaining pieces. Then Anders left in August [of that year] and then Per left a week later. So it was only me and the bass player left, me and Jonas [Björler]."

Jensen: "I think part of the reason [Peter, Anders and Per left] was that the two latest albums with that lineup [2008's 'Versus' and 2011's 'Unseen'], they weren't so successful. So we were professional musicians for 13 years. And you need to have money to put food on the table and to pay your rent. If you don't get paid, there's gonna be trouble. So I think that was part of it. And then we also felt disappointed, or frustrated, that people didn't understand 'Unseen'."

On whether going back to the old-school THE HAUNTED sound on the band's new album, "Exit Wounds", was a conscious decision:

Jensen: "The thing with THE HAUNTED is that we have always been five guys that have written music together; we were all like five generals. I mean, Marco's from FACE DOWN, I had SÉANCE, the twins had AT THE GATES, and so on. Every album has been written without us knowing what will happen. So we put our riffs in, and then everyone contributes, and we discover what the outcome will be. This is the same with 'Unseen'; we didn't know it was gonna sound like this. It was what happened. Same with 'Exit Wounds'. We didn't know what was gonna happen. We have never sat down and said that we have to make this kind of album. It's kind of logical that this album sounds the way it does, because we have the drummer from the first album, we have the singer from albums two and three, and me and Jonas have been in the band forever."

On whether reuniting with some of the band's early members felt the same way as it did "back in the day":

Jensen: "There's a big difference, because we don't live in the same city. I live two hours from Marco and two hours from everyone, I guess. And then Adrian [Erlandsson, drums] lives in England, in London. He moved to London to join CRADLE OF FILTH. We can't really rehearse that often. So the new experience has been we have to send stuff over the Internet."

On how THE HAUNTED found guitarist Ola Englund:

Jensen: "I saw Ola online. You Germans don't know about Ola, because GEMA [the German society for musical performing and mechanical reproduction rights] has a thing against YouTube. But he's a YouTube-famous guy. He's got 24 million views. He makes guitar videos. 24 million views on his videos! He's probably more famous than us. If you're 14, 15, 16 years old today, you sit with a guitar, you sit in front of your computer, you learn riffs and everything from watching videos. That's how I found him. I did a YouTube search of some guitar amplifier or something, and there was this blond, Swedish guy showing up in every video. I [was, like], 'Who is this guy?' So I looked for his name, I found him on Facebook, I sent him a message, like, 'What about this guitar amplifier?' Blah blah blah. He answered. We wrote back and forth. I wrote Jonas, 'This is a really cool guy. He really knows how to play.' I sent him a few links, he checked it out, and he was the first guy we asked [to join]."