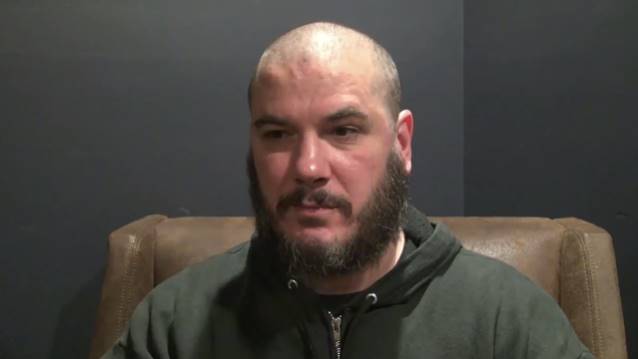 PHILIP ANSELMO: How I Found My Own Identity As A Vocalist

RockScene.com recently conducted an interview with former PANTERA and current DOWN frontman Philip Anselmo. You can now watch the chat below.

Speaking about how he found his own identity as a vocalist, Anselmo said: "I don't think I started maturing as a vocalist 'till I was 15. And then after I started to mature, everything happened really quickly, and my range grew mightily. And it was quick, it happened quick. By that time, I'd started jamming with older guys, whatnot, and I would come home from school every day and practice JUDAS PRIEST's 'Unleashed In The East' front to back and do it the way Rob Halford did it. People who think Rob Halford uses falsetto are sadly mistaken; that's a full-out voice, and that's how I learned. And I never had falsetto; I've always sang full out. Eventually, when I found and wanted and needed to find my own identity, I purposely kind of abandoned that style because, in my mind, it had already been done before and done the best it could be. There's only one Rob Halford. I know there's some other guys that could sing very well and whatnot, but that style, I thought, had been done to death, and heavy metal needed a new attitude, I guess, brought to it instead. And it was already there; there was already the first METALLICA record and SLAYER, for sure and whatnot. And don't get me wrong, Tom [Araya] could hit those high falsetto notes, but that's not what SLAYER was about; it was more about aggression, especially vocally. So it was all happening around me. I just needed to get that perfect blend, man, of hardcore attitude from bands like AGNOSTIC FRONT, CRYPTIC SLAUGHTER… shit… obviously BLACK FLAG and… so many others. It's unbelievable how many influences I used and incorporated. I even used death metal moments and whatnot, cup the mic, shit like that, for effect. So I always evolved."

DOWN's new EP, "Down IV - Part Two", was released on May 13 via Down Records/ADA Music. Tracked at Nodferatu's Lair —Anselmo's home studio — and produced by Michael Thompson, Anselmo and DOWN, the EP is the eagerly anticipated sequel to "Down IV - Part One".