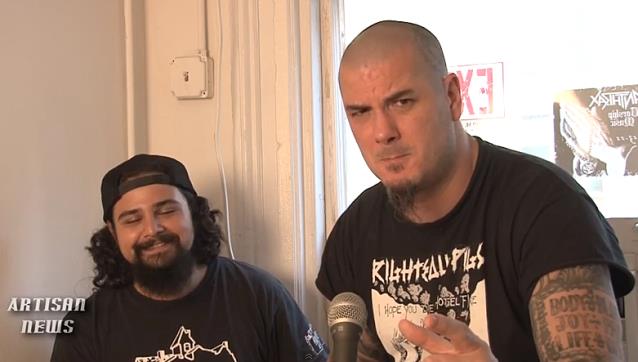 PHILIP ANSELMO Talks To ARTISAN NEWS About Formation Of THE ILLEGALS, Creation Of Solo Debut (Video)

On August 15, former PANTERA and current DOWN singer Philip Anselmo and the drummer of his solo band, José Manuel "Blue" Gonzales (also of WARBEAST),were interviewed by Artisan News about the formation of THE ILLEGALS and the creation of Anselmo's first-ever solo album, "Walk Through Exits Only". You can now watch the report below.

"Walk Through Exits Only" sold around 8,700 copies in the United States in its first week of release to debut at position No. 35 on The Billboard 200 chart.

Produced by Anselmo and Michael Thompson, and recorded over the past couple of years at Philip's New Orleans studio, Nodferatu's Lair, with his band THE ILLEGALS — guitarist Marzi Montazeri (ex-SUPERJOINT RITUAL) and José Manuel Gonzales — "Walk Through Exits Only" is abrasive, aggressive, anthemic and 100% Anselmo. The album's eight songs are as unstrained as it gets, from "Battalion Of Zero" to "Usurper's Bastard Rant", to the album's title track that goes against the grain and right through the exits. Brash, brutal guitars cut through punishing percussion as Anselmo screams with uncompromising ferocity and uncontainable fire.