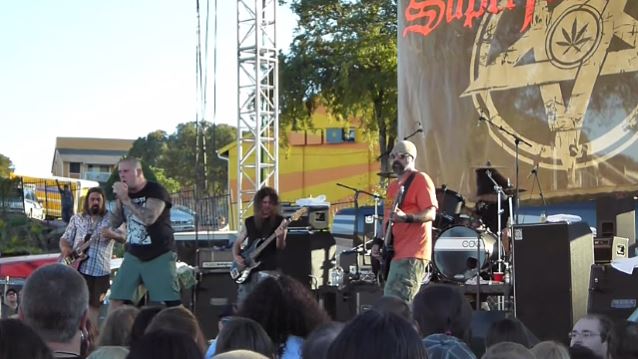 Former PANTERA and current DOWN frontman Philip Anselmo's SUPERJOINT RITUAL project will embark on a tour later this year. The SUPERJOINT tour plans were confirmed to AXS.com by drummer José Manuel Gonzales, who plays with Anselmo in the singer's solo project, PHILIP H. ANSELMO & THE ILLEGALS.

Philip recently shot down reports that SUPERJOINT will hit the road with HIGH ON FIRE, but revealed that fans can "look for [SUPERJOINT] to do some shows for damn sure."

SUPERJOINT RITUAL reunited last year for an appearance at the 2014 edition of Anselmo and true crime author Corey Mitchell's groundbreaking horror-meets-metal extravaganza, the Housecore Horror Film Festival, which was held October 23-26, 2014 in Emo's in Austin, Texas. For legal reasons, the band performed at the event under the abbreviated moniker SUPERJOINT.

Fan-filmed video footage of SUPERJOINT's appearance at Housecore Horror Film Festival can be seen below.

The band's lineup for the show was as follows:

Asked in an October 5, 2014 interview with Jack Antonio if the SUPERJOINT RITUAL reunion will be a one-off or if there will be further activity beyond the Housecore Horror Film Festival appearance, Anselmo said: "It is a one-off, a hundred percent, as of right now, man, It's something that we get asked about quite a bit, but, really, for us, if you look at the guys that are in the band, original members, it's really me and Jimmy [Bower, guitar], and, of course, we've got Kevin Bond coming in on guitar and whatnot. But, really, if you look at just Jimmy and me alone, we're gonna be crazy busy coming up in 2015 as well, and Jimmy with EYEHATEGOD and whatever obligations DOWN decides to take on. But I think the main focus of next year would be, maybe around summer time, is getting [to work on] that third [DOWN] EP. And other than that, man, I wanna write another solo record and produce some bands. So, [there will be] not as much touring for me next year."

He continued: "We realize this is the end of the push for this year, and SUPERJOINT just happens to be part of it. It's gonna be fun, man. It's gonna be a blast."

Anselmo was asked the 2011 edition of the Sweden Rock Festival if there was any possibility of a SUPERJOINT RITUAL reunion at some point in the future. He replied: "Absolutely a hundred percent no fucking way. I know some people like that band, but there's too many sour feelings, too much bad business and I don't take steps backwards anymore, I'm fucking running forward. You hear me? Good."